Bicycles in the Field

While the Co-Habitant and I have separate dayjobs, we also work together as an artist team. The artwork we make is hard to summarise, but, among other things, it involves photography - usually in far-off, remote locations. The distance to the locations, the remoteness, the amount of photo equipment and props we use, and the need to be on location at a specific time so as to get the right light, make driving the most suitable means of transport to the sites. However, we now have at least two photo-shoots planned that are close to Boston, and the distances to these locations (13-15 miles from home) are reasonably cyclable. Prior to doing the actual photo shoot, we normally take a reconnaissance trip to the location - to take test shots, to get a feel for the light, and to try out background compositions. These trips don't require much equipment, and so we decided to try to do this on our bikes. 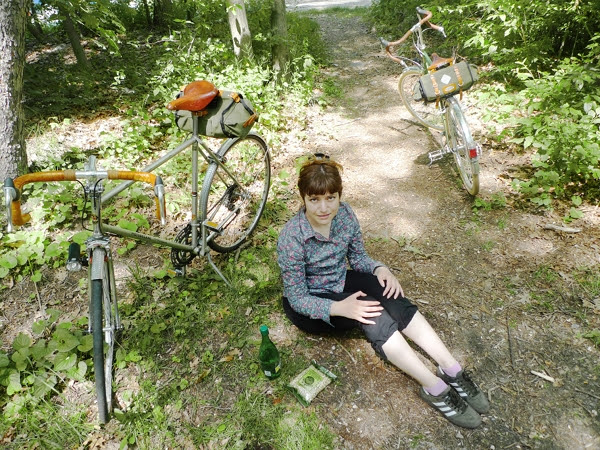 It took over an hour to arrive at the photo-shoot location on our roadbikes. While we have cycled that distance many times before, it has always been in a recreational context, never for work. Here are some notes as to how this was different:

It was difficult to focus on creative thoughts with my leg muscles working overtime (hills) in the summer heat. Instead, my focus is mostly on the physical process of cycling and on monitoring traffic conditions.

Also, I realised that when we cycle together we tend to talk about cycling-related matters - a habit that proved difficult to break! When we drive to photo-shoot locations, we use the trip as an opportunity to have in-depth conversations about our work. We did not succeed in doing this while cycling, as the topic of conversation kept shifting to bikes - that is, when it was possible to talk at all. 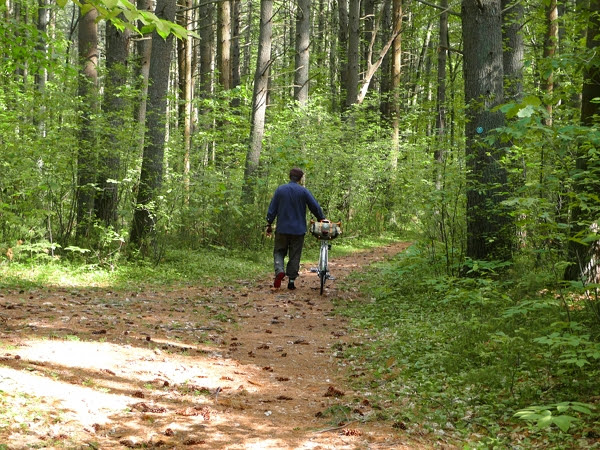 Upon arriving on location, even after a rest, it was difficult to focus on work. We were in a forest, dissected by foot-paths covered in gnarled tree roots and pine cones. The Co-Habitant got excited at the opportunity to cycle off-road. I became frustrated - both because I was too afraid to do it, and because that wasn't what we were there for. I insisted that we walk the bikes and search for potential scene backdrops instead. He agreed, but I could tell that his spirit yearned for off-road cycling and he wasn't truly able to keep his mind on our project. 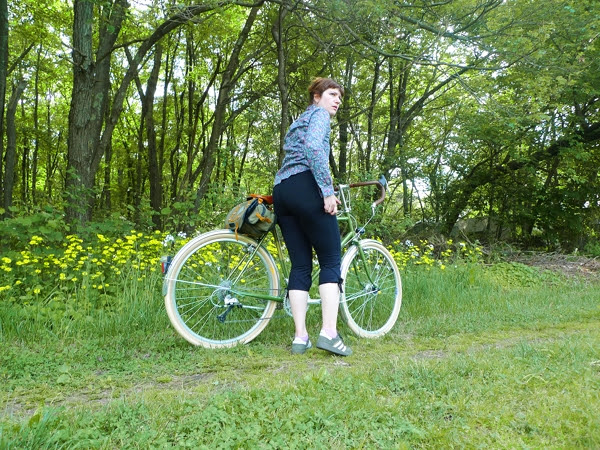 Finally, we happened upon a grassy clearing with wildflowers, and now it was my turn to get distracted. I was supposed to be taking test shots of the location, but I could not resist the opportunity to take "bike portraits". Neither could the Co-Habitant. We ended up posing our bicycles amidst the flowers and then cycling around the grassy meadow, just to get it out of our system. Pathetic! 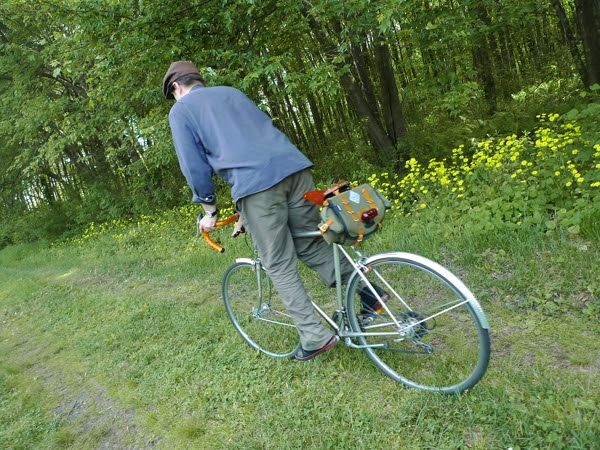 In the end, we did take the test shots we needed, and even came up with plans for the perfect backdrop. But the process took all day, and we repeatedly struggled with staying on task. The lesson? Well, I guess that we have a hard time combining fieldwork with long bike trips, as the latter is not only exhausting, but fosters a cycling-specific atmosphere that is difficult (for us) to break out of.

That is not to say that we are giving up and will take the car on such trips next time. Rather, I am trying to figure out how to prevent the same conflict from happening again. As much as I love bicycles, they are (believe it or not!) not the center of my universe, and my artwork is infinitely more important to me. I would like for cycling to be a tool that will help me with fieldwork, without sucking all the attention away from it. Just need to figure out how exactly to make that happen.
Labels: countryside drop bars Motobecane Myles Rivendell technique