People who have lots of unfinished bike projects lying around must be used to this - but to me there is something sad and anxiety-provoking about having a bike at home that's missing parts, or a frame that has not had a chance to become a bicycle yet. It's as if the non-functional bicycles are in a state of velo-purgatory - crying out to be completed and ridden. 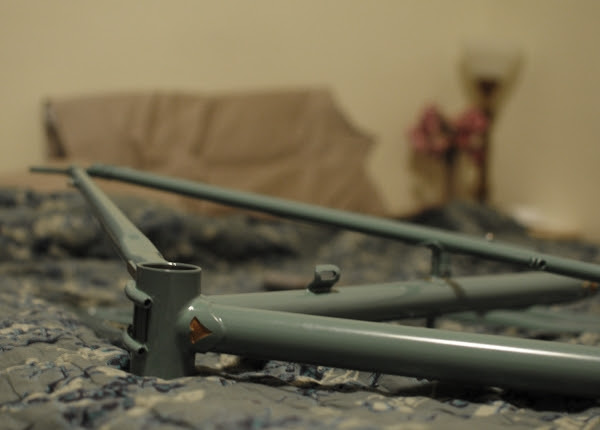 My beautiful Royal H. mixte frame came home today, and it looks like I will be building it up much later than I thought - possibly in the end of the summer, or whenever I manage to save the money. And my attempt to tackle the Sam Hillborne frame on my own over the winter did not end well. In the end I brought the frame back to Harris with the metaphorical tail between my legs, and it is only now being built up - in the very midst of the spring customer rush. Naturally, having a bicycle built at a shop is more expensive than doing it oneself, and so my plans for the Royal H. mixte are on hold until some serious financial recovery time after the Hillborne. In the meantime, I better wrap it in bubble-wrap and put it away. I don't think it's healthy to sit on the bed next to a bicycle frame and stare at it for this long.

My Mercier mixte is now also a "purgatory bike", albeit very temporarily. The large chainring is off getting "de-toothed" by a fine gentleman who is a reader of this blog, as part of my scheme to convert this bicycle to a 5-speed. The chainring will be back soon, and till then I respond to the Mercier's questioning glances by gently stroking its handlebars and assuring it that it is not being disassembled for parts but is being improved.