I watched two films over the past week, and it so happens that both not only featured scenes with bicycles, but used these scenes in a similar manner. 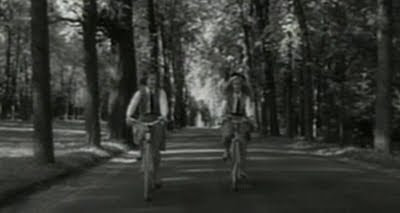 Therese and Isabelle is a black and white film c. 1968 based on the novel by Violet Leduc. It is a coming-of-age story about a doomed love affair between two girls at a French boarding school. In the first half of the film, there is a scene where the girls are cycling along an endless tree-lined alley and laughing. (Not that it matters in the context of the film, but they are riding beautiful mixtes with hammered fenders and dynamo lighting.) This is probably the happiest and most idyllic point of the film - where joy, freedom, and limitless possibilities are the dominant themes. Later it all ends badly, but the cycling scene is the antithesis of the tragic ending. 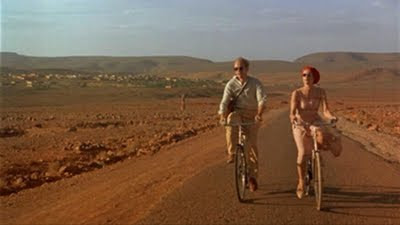 The Sheltering Sky is a 1990 Bertolucci film starring John Malkovich, based on the novel by Paul Bowles. It is about an aristocratic composer and his beautiful wife, who aimlessly travel around North Africa while trying to overcome complex marital difficulties. This film too ends badly. But before things go downhill, there is a bicycle scene - where the husband and wife are traveling through a stretch of the Sahara on his and hers Roadsters, with cream tires and rod brakes. Unlike any of the other trips they take together, this one is infused with positive emotion and hope for a future.

Though the two films could not be more different from one another, the bicycle plays the same symbolic role in both: representing hope, joy, freedom, and simplicity. At the same time, in both films the bicycle is also used as a symbol of the unsustainable. "It is not possible for things to stay this good," the cycling scenes suggest, thereby foreshadowing an eventual tragic ending. In order for these associations to work as cinematic tools - which in both films they do - there has to be a deeply ingrained cultural perception of the bicycle as a symbol of escapism and wishful thinking; the bicycle is something that is incompatible with "real life". And this to me was very interesting to notice. Something to think about, at least.
Labels: films social commentary