Last night I was at the Urban Revolutions panel at MIT with velo-friend Biking in Heels. This was not something I planned to attend, but she had an extra ticket and I was free - so I came along. The event featured talks by musician David Byrne, director of Boston Bikes Nicole Freedman, director of the LivableStreets Alliance Jacqueline Douglas, and associate director of SENSEable City Lab (inventors of the "Copenhagen Wheel") Assaf Biderman. 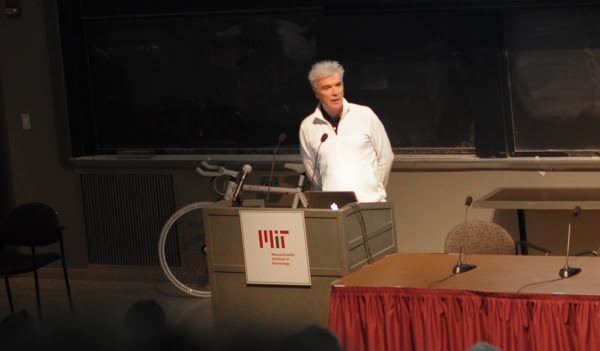 In case some might not know, David Byrne was the lead singer of the Talking Heads and has since been involved in a number of artistic and musical projects. Most recently, he has become known for his cycling advocacy and for his book on the subject, Bicycle Diaries. Over the past year Byrne has been on tour giving talks throughout North America on the topic he describes as "Cities, Bicycles, and the Future of Getting Around". Cambridge, MA was his latest stop. 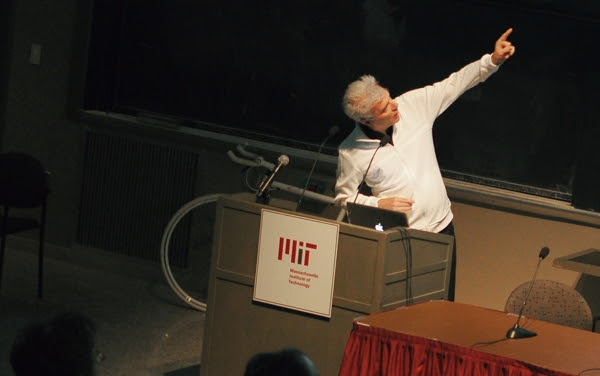 David Byrne came across as thoughtful, knowledgeable and funny. His talk was neither gimmicky nor too heavy on the advocacy; I would put it more into the category of Urban Planning. He summarised the history of how our un-neighborhoodly neighborhoods came to be the way they are and discussed potential solutions, with urban planning initiatives and the return of "everyday cycling" being the primary points of focus. 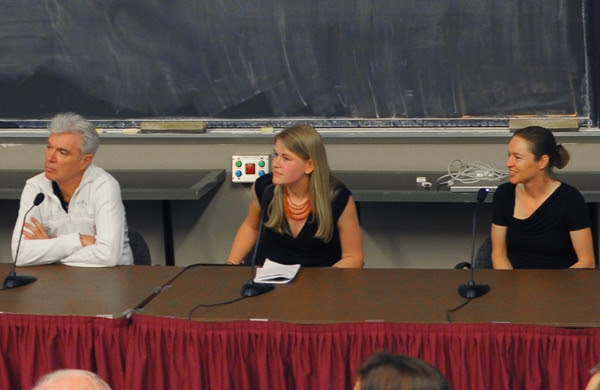 Jacqueline Douglas and Nicole Freedman (pictured above next to Byrne) discussed similar ideas, but applied them specifically to Boston - stressing activism and grassroot movements as catalysts of change. They noted that Boston's cycling infrastructure has basically been created from scratch over the past 2-3 years, and that the number of cyclists in the Boston area has increased dramatically over this period of time. Douglas and Freedman plan to continue this trend, with a particular emphasis on infrastructure in the form of traffic-segregated bike paths. 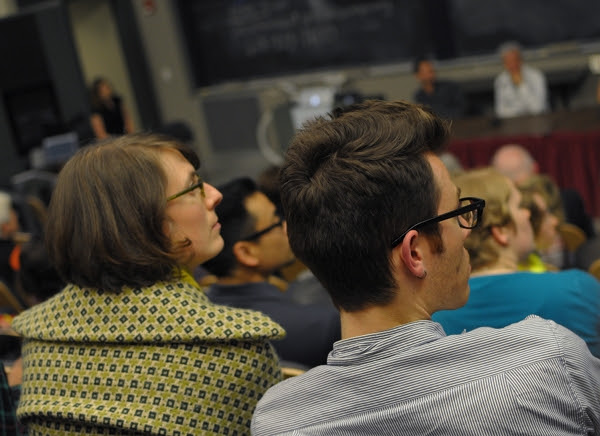 The large MIT lecture hall was full for the duration of the event, with the audience listening intently and enthusiastically. 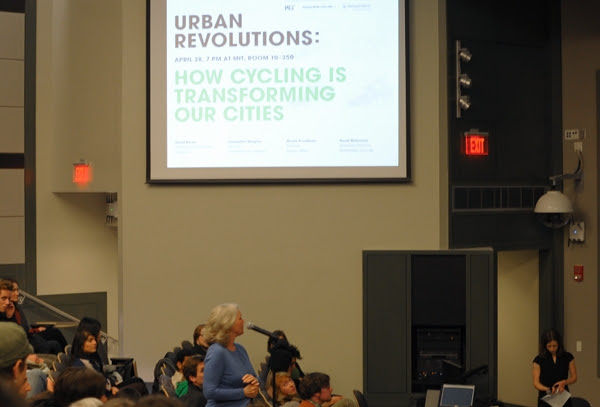 Somewhat to my surprise, the Q&A panel following the individual talks did not result in much debate. Namely, I expected vehicular cyclists to comment on the segregated paths issue, but this did not happen. Perhaps there were not any in the audience? Or else the speakers so clearly allied themselves with the Amsterdam/Copenhagen model, that the vehicular cyclists decided not to bother stirring the pot. 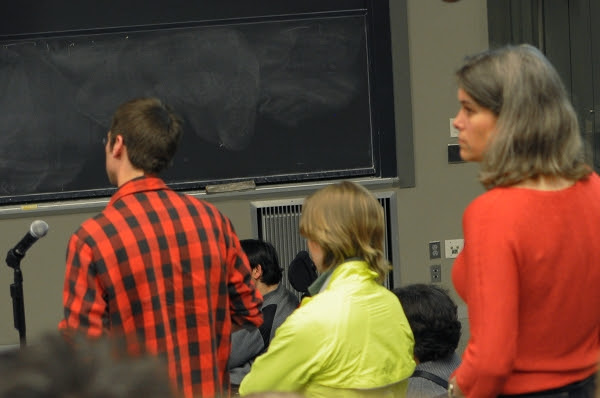 Biking in Heels (the lady in red) got in the queue to ask a question - but alas they stopped right before it would have been her turn. 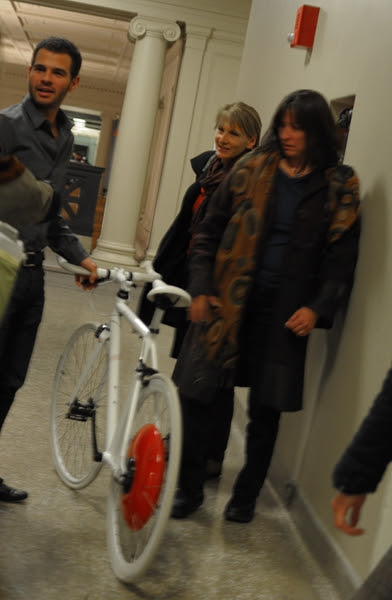 After the event was over, the most popular panelist was Assaf Biderman of the SENSEable City Lab - demonstrating the "Copenhagen Wheel" to those who wanted to try it. 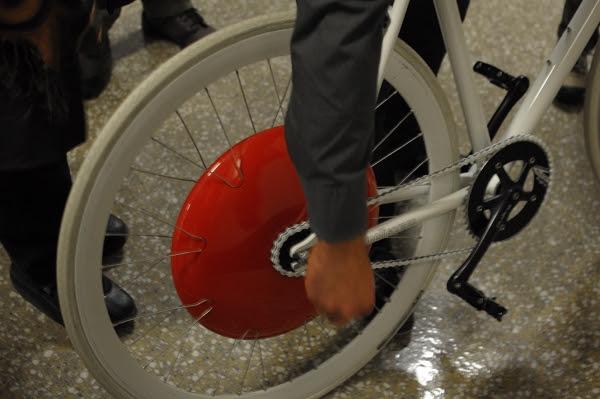 The Copenhagen Wheel turns any existing bike into an electric bike and "differs from other electric bikes in that all components are elegantly packaged into one hub". The energy spent while pedaling and braking is used to power the motor, and tons of additional features (including route planning and pollution levels detection) are bundled inside the hub. 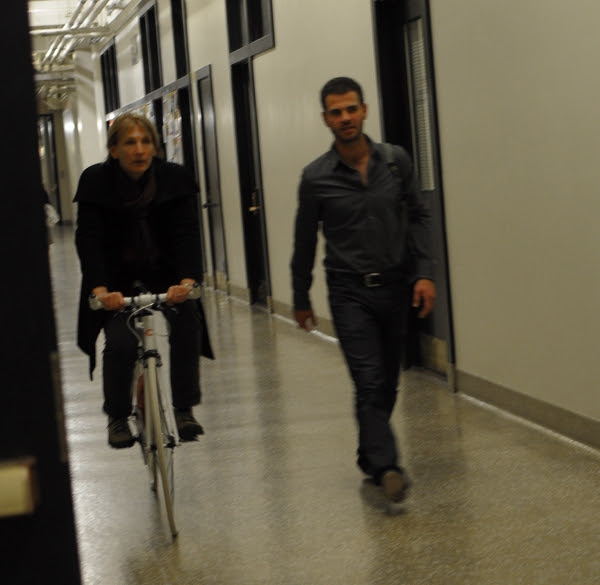 The Copenhagen Wheel is meant to be a versatile option that will allow more of the population to cycle - including those who are elderly, have trouble handling hills, or do not feel fit enough to ride a bike. While I have no interest in electric bikes myself, I think that this option makes perfect sense for those who need it. 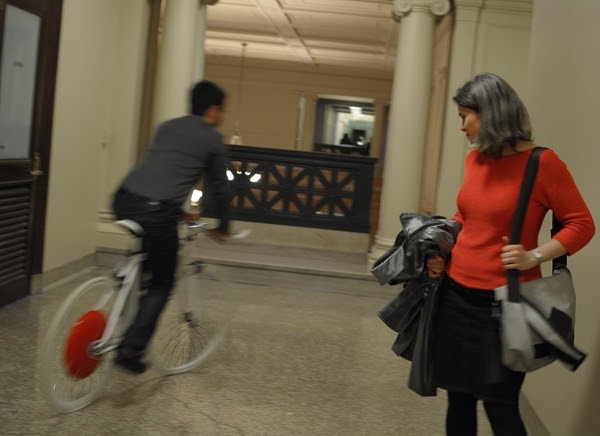 What does not make as much sense to me, is the decision that the prototype bike housing the Copenhagen Wheel should be a sleek, fixie-looking, diamond frame bike with aggressive geometry, narrow tires and "bullhorn" handlebars. It just doesn't seem to fit the population for whom the Copenhagen Wheel was designed. My suggestion to the SENSEable City Lab, is to put the wheel into a bike that is more accessible to the general public. 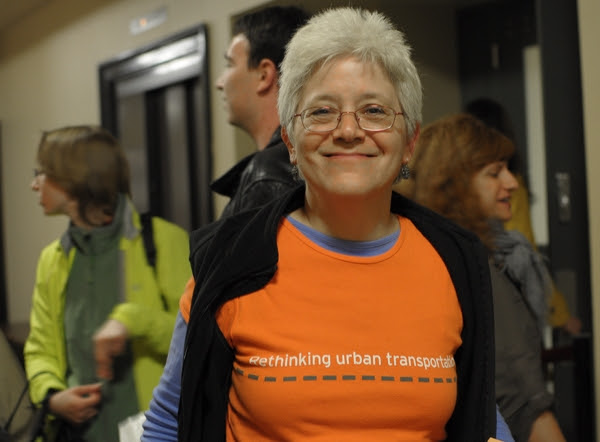 Also popular after the event was this nice woman from the LivableStreets Alliance, asking people to fill out requests for improvements they would like to see done to the Charles River bridges. Given that I almost get run over by cars 75% of the time I try to cross an intersection at the end of one of these bridges, I gladly filled out a form with my requests.

All in all, Urban Revolutions was an interesting event to attend. If I seem detached in my descriptions, it is because to a large extent I felt that the panel was "preaching to the choir". I suspect that most of the audience had heard and internalised all that was brought up by the speakers long before coming to this event. Furthermore, for all the talk of "equity" and "equal access" that went on, the audience was almost entirely White, and dressed in a way that suggested a very narrow demographic. What exactly, then, was this event meant to achieve? Perhaps a sense of community among existing cyclists and supporters of "livable streets" ideas. At that it was a success. Despite my aversion to "activism", I am genuinely glad that cycling is becoming more commonplace and safer in Boston. And I am thankful to all who play a role in making this happen.
Labels: bicycle events bike friends Boston social commentary