I have just returned to the US, but my last week in Austria was so eventful, that there will be a few days of post-processing. My final day in Vienna was especially action-packed. In addition to a full work schedule, many last-minute errands and a farewell dinner, I had a mini-cycling adventure with Jacqueline's owner, Wolfgang. 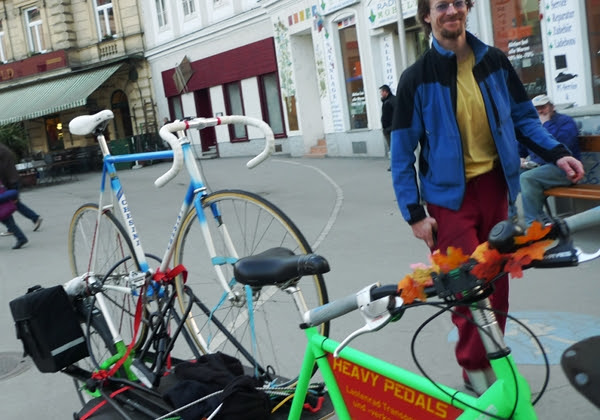 As the title of this post suggests, we went to the Velodrome! In case this is a new concept to some, a velodrome is an arena for fast-paced track cycling - i.e. cycling on a (fixed gear) trackbike, either for practice or to race. I know that some of you may be wondering what place this possibly has in my world of vintage loop-frame bicyces that weigh 50lbs. Well, I have always admitted my trackbike fantasies, however hopeless and laughable they may be. And trackbikes need not mean carbon fiber monstrosities! - The original pathracers were beautiful. 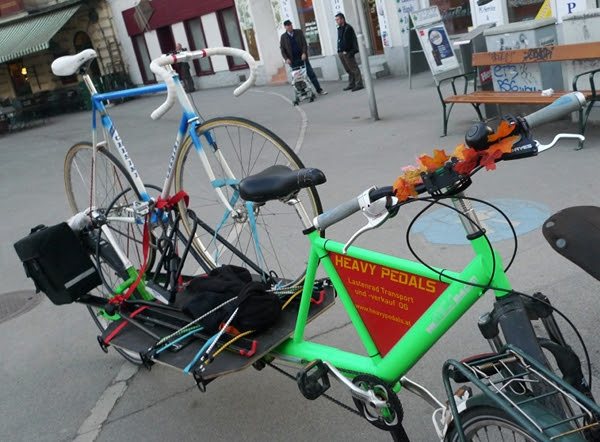 Wolfgang is living proof that love of the track and love of vintage bikes need not be at odds with one another: He collects 100-year-old bicycles, rides around town on a Dutch bike, and goes to the velodrome. In fact, he transports his trackbike to the velodrome on this unbelievable cargo bike, which he also uses for one of his projects, Heavy Pedals. The trackbike is a 1988 Chesini (Italian), of which Wolfgang has two(!) in his collection. 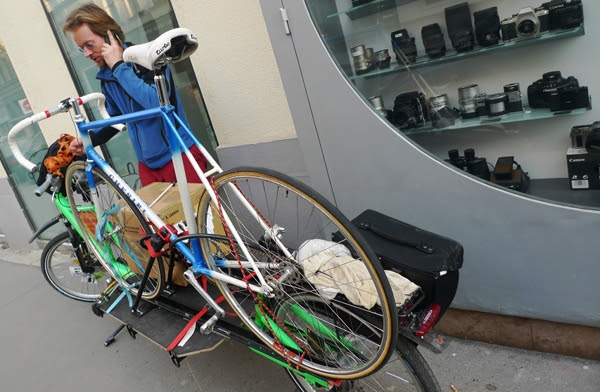 Before I describe our trip to the velodrome, I will backtrack and say that Wolfgang did me an enormous favour that day. I had been looking for a Large Format camera for some time, and finally found a good deal - on my last day in Vienna. I then realised that not only did I have less than an hour to make arrangements to pick up the camera before the store closed, but I had no plan of how I would actually get the camera home. To explain, a large format camera is so large, that it requires you to load an individual sheet of film into it for every shot. Okay, in the digital age that might mean nothing to my readers, so I will just say that it's huge, would not fit on Jacqueline, and could not be easily carried on public transport during rush hour. 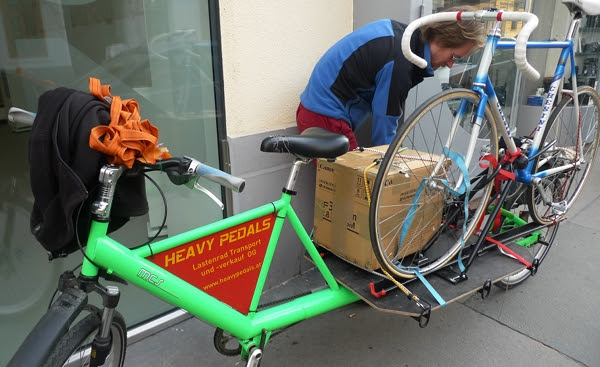 Wolfgang to the rescue with his cargo bike! As you can see, the box with the camera is quite large... but the cargo bike's enormous platform swallows it right up. I am pretty sure there is enough room there to transport a modestly sized mobile home! Of course a few passer-bys stopped to watch as we loaded the camera onto the bike, and the camera shop owner took photos. 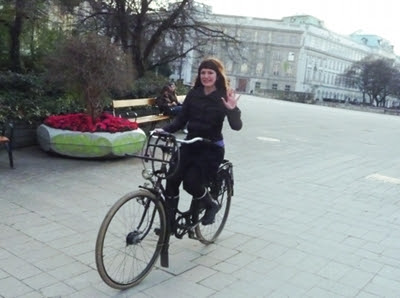 [image by Wolfgang Höfler]
We rode across town to drop the camera off at my flat (thanks so much again, Wolfgang!), and then on to the velodrome. Wolfgang cycles "vehicularly" and aggressively, so following him was quite a change from the kind of cycling I've been doing in Vienna. On the way to the velodrome, we raced a bit on the main alley through the Prater park, which was great fun. Jacqueline can go pretty fast, and so can Wolfgang's cargo bike. I arrived to the velodrome exhausted, though for Wolfgang this was apparently just a mild warm-up. 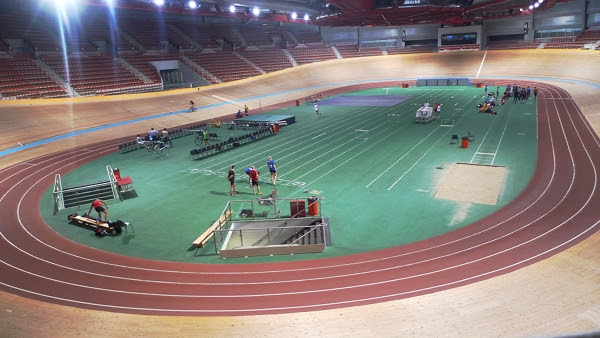 So... the Vienna Velodrome! Behold the awesome beauty of the Ferry Dusika Hallenstadion, Wien - the only velodrome in Austria. This is a view from the top rows of the spectators' seats. The green area in the middle is for track-and-field training, and has a rest area for cyclists on the middle-left (if you click to enlarge the picture, you can see the chairs and the bike racks). In front you can see the two staircase entrances from which the athletes and coaches emerge. The red inner track is for runners. And the outer wooden track is for cyclists. 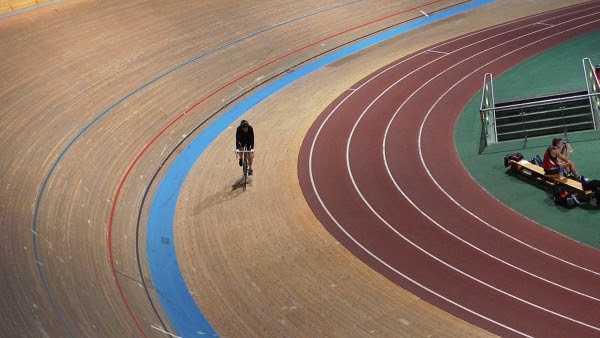 This is difficult to capture in photos, but the cycling track is sloped sideways at a 45 degree angle. This is probably common knowledge to cyclists, but I had no idea, so seeing it was quite a shock. It was explained to me that the slope allows cyclists go at a faster speed. 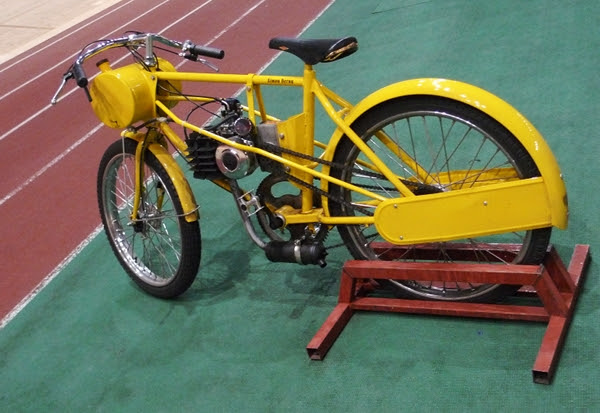 Another novelty was this Derny motorized bicycle for motor-paced track cycling events. So exciting to see all of these things. 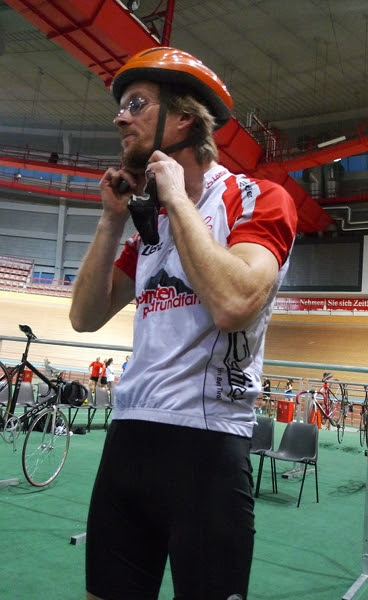 Wolfgang prepares for the track. I am extremely envious, but delighted to be in the green area taking pictures. I even brought a film camera with 1600 ISO film. 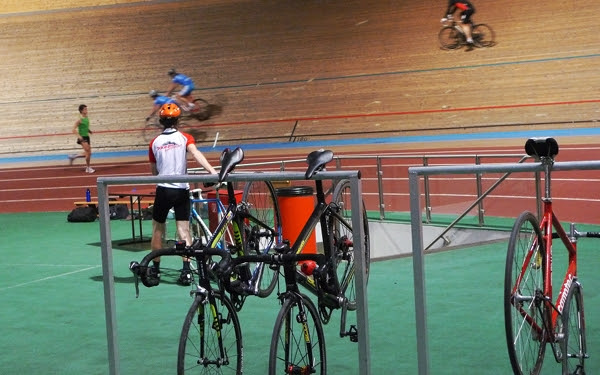 Here you can kind of see how steep the slope of the track is - see that cyclist in the background? 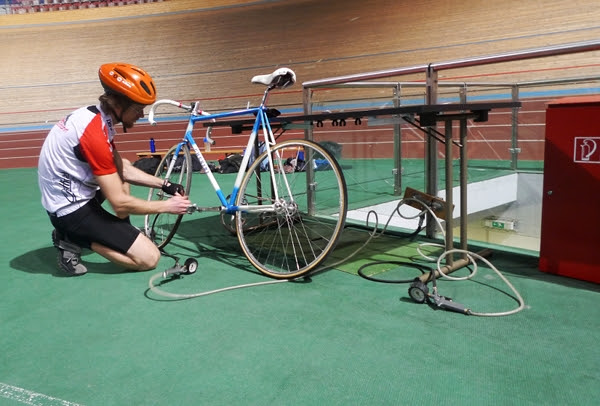 Wolfgang adding air to his tires. 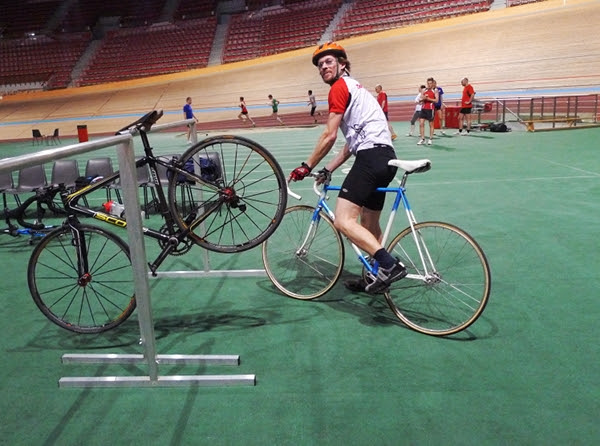 And he is off! 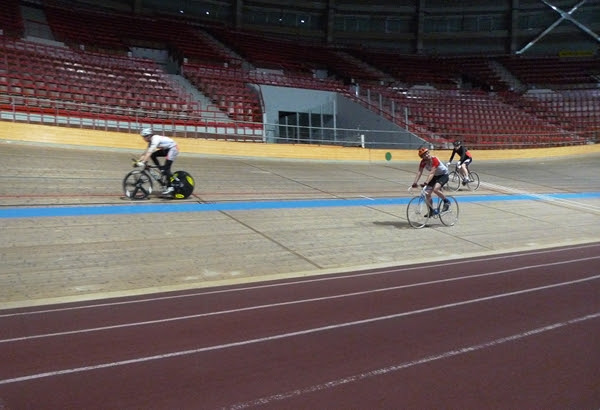 There he goes around the track. 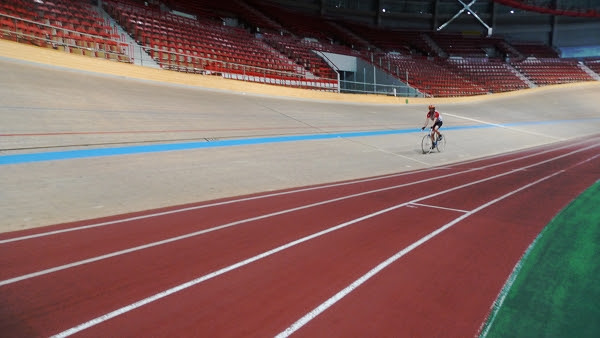 Oh how I wish I could do this too! But first things first: I can't even ride a fixed gear... or a diamond frame for that matter! 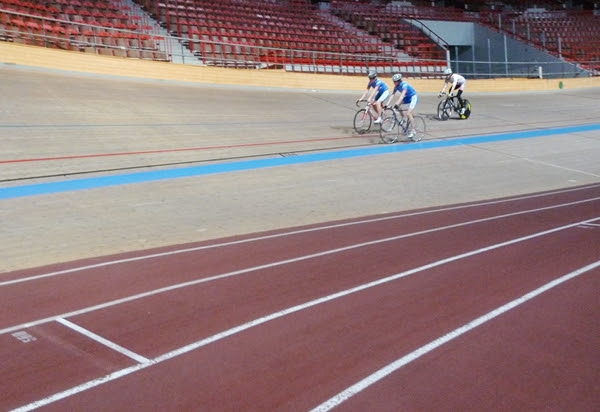 The track was not very crowded, because it was a warm evening. There a local team practicing, and a few stray individuals. 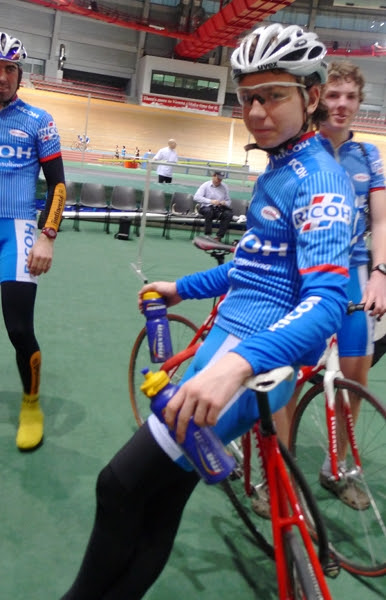 I took a couple of shots of the team members (with permission) after they got off the track, and was surprised to see how young some of them were. 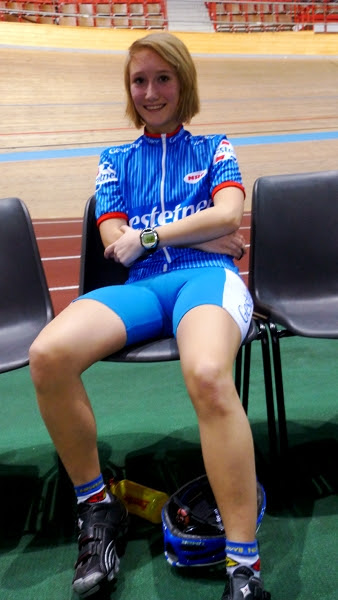 And how female! This beautiful girl didn't even seem especially tired. Maybe there is hope for me after all? Though I would need to seriously get in shape first!

For now it was good just to see the Velodrome and to understand what track cycling involves. Would they permit an early 1900's pathracer on the track, I wonder?
Labels: bike friends drop bars fixed gear Jacqueline roadcycling technique urban cycling Vienna