Jacqueline in the Light of Day 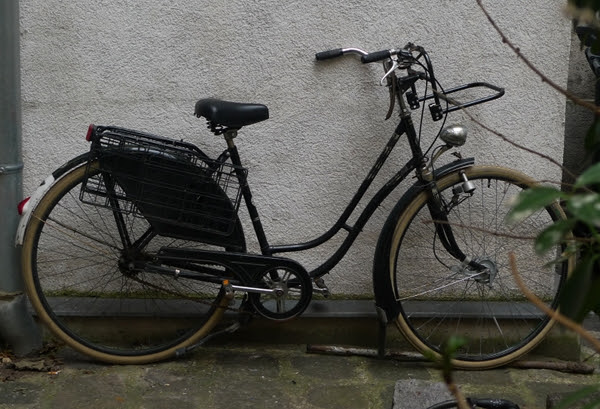 Hopefully these daylight pictures of Jacqueline will do her more justice than the blurry ones from the previous night. These were taken yesterday in my courtyard. I rode her around Vienna all day in a state of disbelief. She rides wonderfully and the folding basket-panniers are amazingly functional. It does not matter what I am wearing, what I am carrying, and where I need to go - this bicycle is ready for anything. 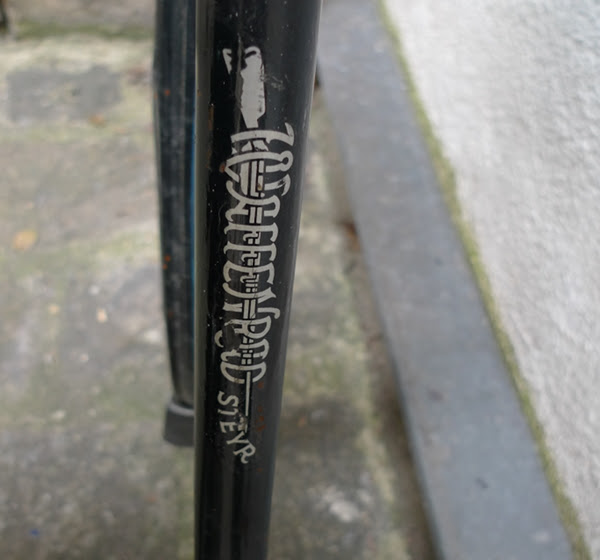 As mentioned previously, Jacqueline is a lady's Steyr Waffenrad - which is one of the oldest (if not the oldest?) Austrian bicycle manufacturers. In my previous post someone commented that this is "the Austrian version of a Dutch bike", but while it's true that these are generally referred to as "Hollandrads", I do not think that is really the case. Waffenrad was established in 1895, and was influenced by the British roadster manufacturer BSA rather than by anything from the Netherlands. It later became a generic name used to describe a certain kind of bike, and the most popular manufacturer of these was Steyr. I have been told that at one point Austria had over 180 bicycle manufacturers. Sadly, most are no longer in business. 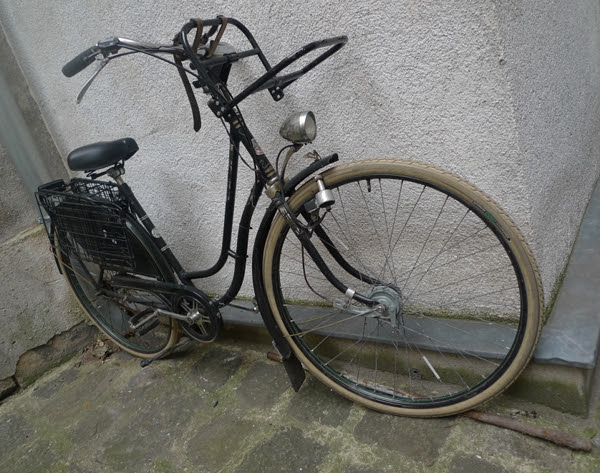 Jacqueline is a 1980s model, though its components are from a variety of time periods. The frame design is a "swan frame": The downtube curves around the front wheel and the top tube forms a complimentary curve. Put together, they form a "swan's neck" shape. 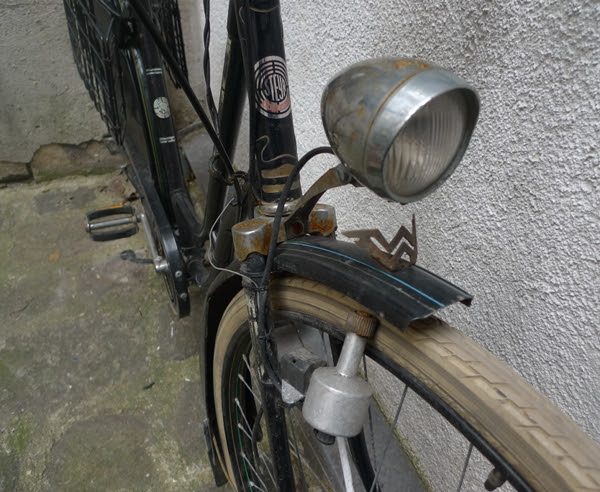 To my eye, the lugwork on the headtube resembles swan as well, though I may be imagining things. 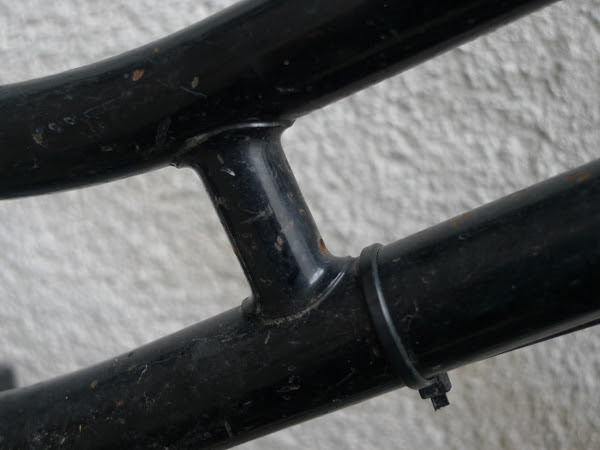 Lugged connector between the downtube and the toptube. 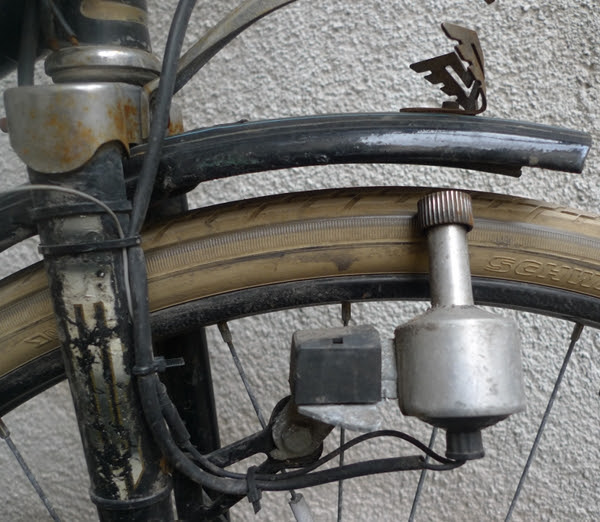 Is the bicycle equivalent of "hood ornament" a "fender ornament"? This bike has one in the shape of a wing-like art deco "W" - appropriated from a German Wanderer bicycle.
Both the headlight and tail light are dynamo powered. I have never ridden a bike with a bottle dynamo (only hub), and based on what I'd heard about old dynamo bottles I expected it to be pretty bad. In fact it works splendidly. There is a distinct hissing sound of the bottle rubbing the tire, but it does not feel any harder to pedal. To de-activate the light during daytime, simply push the bottle sideways away from the tire. To activate it at night, press the release switch and it pops back into place. Easiest lighting system I've ever used, and the bottle feels extremely durable. 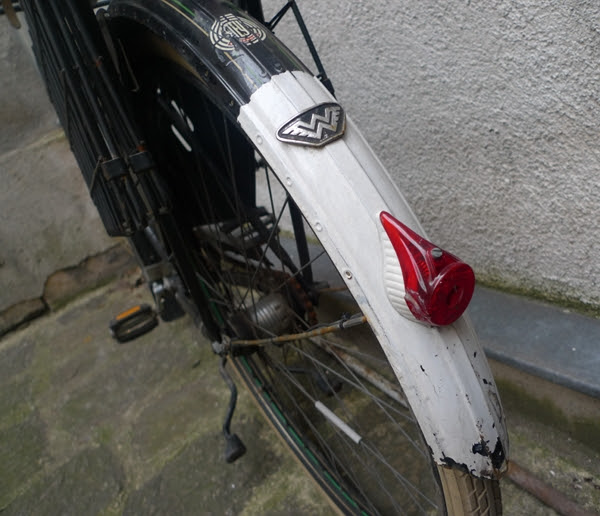 The beautiful tear-drop tail light. I very much want one of these for one of my bikes. You can see the little wire coming out from under the fender and running along the rusty stay, zip tied to it. The winged "W" logo is once again from a Wanderer, though the fender itself is native. Notice the holes that have been drilled into the fender for the original dressguards. You can also see the double kickstand (I prefer this one to the Pletscher) and the rear coaster brake hub. It is not a Sturmey Archer; in fact I saw no markings on it at all. 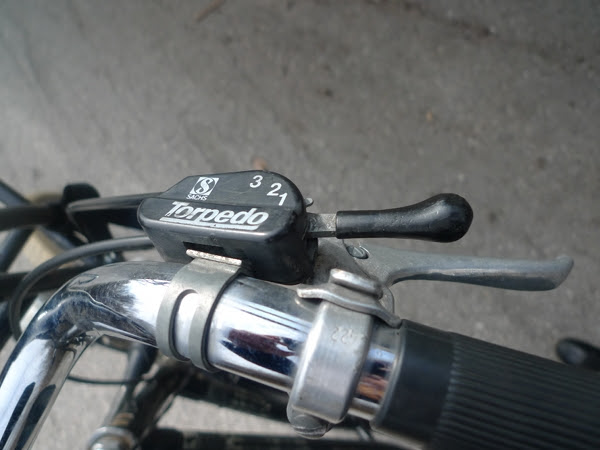 The coaster brake functions extremely well, but the front (hub) brake is mostly decorative - It works when you're stopped at an intersection and want to prevent the bicycle from rolling forward, but doesn't really make an impact when the bicycle is in motion. The coaster brake is plenty though, and I quickly got into the habit of simply ignoring the front brake lever. The hub gears are operated via the "Torpedo" shifter. The gears are widely spaced, similar to the Sturmey Archer AW hub on my Raleigh. Parts of Vienna are quite hilly and I anticipated using the 1st gear a lot - if not getting off the bike altogether in some areas. But to my surprise, I have mostly been using the 3rd and 2nd gears. I by no means have legs of steel, but old 3-speed hubs seem to be magically versatile. 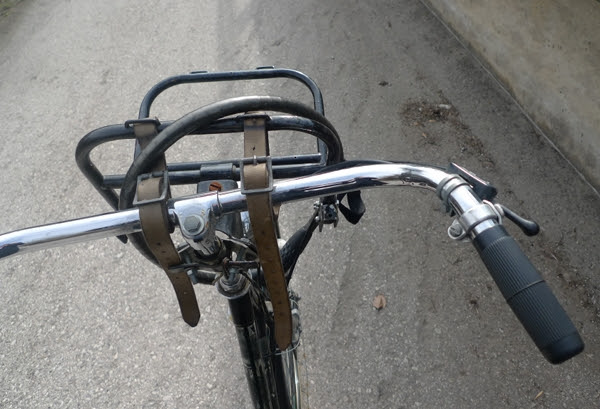 The handlebars are what people today usually refer to as "Porteur" style, but actually they are similar to the version of North Roads that are put on Raleighs with rod brakes. The bar is mostly flat, with the grip areas curving sharpishly upwards and towards the rider. I prefer these to the classic North Road/Albatross bars, which are curvier and more flared to the sides. The plain grips are also surprisingly comfortable. That stuff in front of the handlebars is a folded-up front rack, with a beefy cable lock hanging off it. It all looks like a tangled mess here, but I find it a very comfortable set-up. 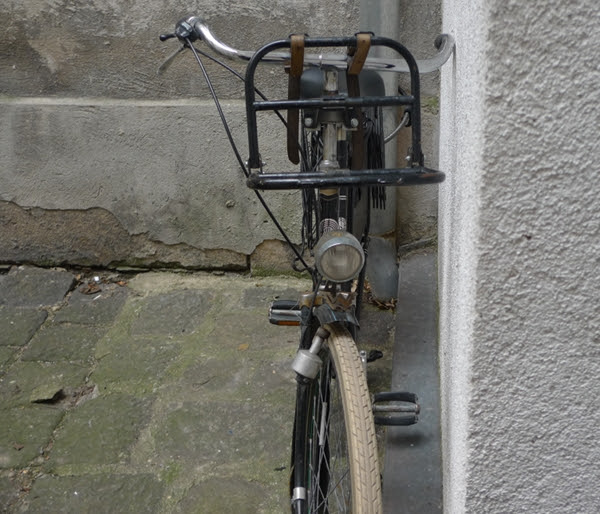 Here is the view from the front, with the rack unfolded. The rack is bolted to the stem and strapped to the handlebars with aged leather belts. It is not supported enough to carry heavy loads, but it is a convenient place for things like extra layers of clothing that might be removed and then put back on during a ride. 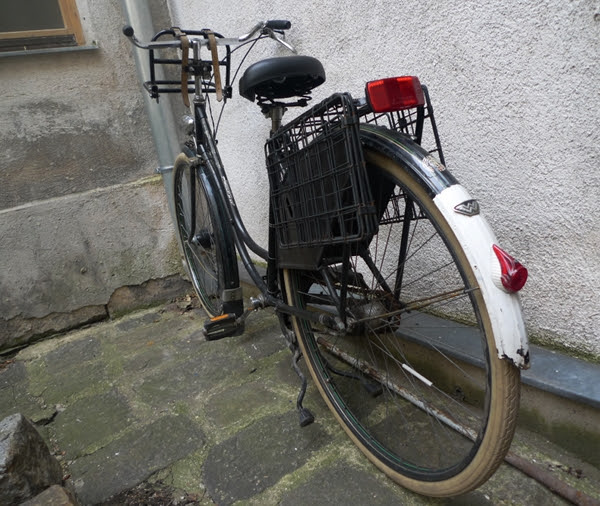 The rear basket panniers, on the other hand, can pretty much take anything you want to put in them. My large work bag fits into these perfectly, as do grocery bags (2 in each). The ride quality is hardly effected when the basket panniers are loaded. I think I need to install these on one of my bikes. The tires are 28" cream Schwalbe Delta Cruisers, just like on my Raleigh at home. They roll fabulously and swallow cobblestones without a peep - wonderful.

The one thing I would change about this bicycle is the saddle (just looking at these plush Selle Royals is painful!), but that of course is an easy fix (if only I'd brought one of my vintage Brooks from home!). Ideally, I would also like a full chaincase - but the chainguard here has been effective so far.

Overall, I feel that every part of this beautifully rusty bicycle has been extremely well thought out by its owner Wolfgang. Everything from the puncture resistant tires, to the super-stable kickstand, to the self-sustaining lighting set-up, to the roomy collapsible panniers, has a feel of perfectly functional design to it. I love Jacqueline. How will I give her back?
Labels: Jacqueline loop frame Vienna vintage