England Made Me: Pashley, Raleigh and Dawes in London

I was in London for only two days and it rained continuously. Somehow rain in England does not seem as dreary as in other countries; it has an almost cheerful feel to it and makes colours seem brighter. This is especially noticeable with green grass and red double-decker buses. I saw far too many nice bicycles in the area where I was staying, so I decided to focus on bikes made by English manufacturers. 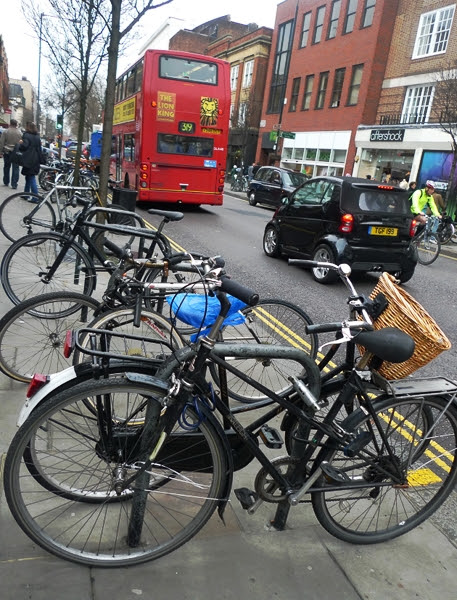 A tangle of black bicycles locked up to a rack on the King's Road; double-decker bus in the background. The frontmost bicycle is a Raleigh mixte that looked to be from the early '80s.

This is the first time I have been back to the UK in almost 5 years, not counting the many hours spent in Heathrow airport during layovers to other destinations. When I lived in England, it was in a small provincial town. London was "the big city" where I would occasionally stay with friends, go to parties, and visit museums. I am at my best in small towns, and many parts of London make me uncomfortable because they somehow seem simultaneously vast and overcrowded. But there are a few areas that have cozy pockets of quiet side streets that appeal to me. My friend's place in Chelsea is in just such a location, and it was nice to stay there. 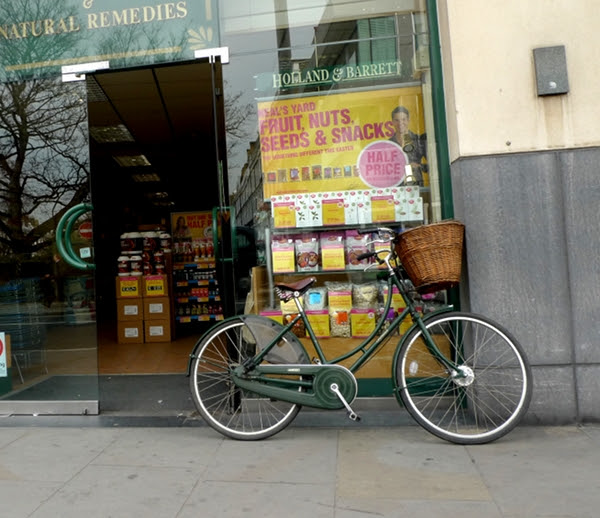 Walking around the neighborhood, I came across somebody else's Pashley Princess waiting for her owner outside a health food store. 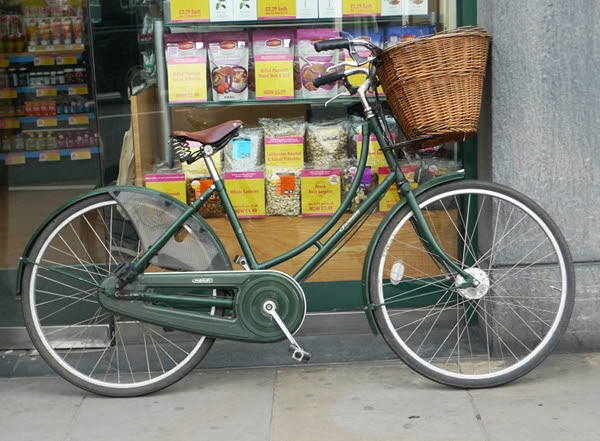 This Princess has seen some use. The basket is tattered around the edges and the frame is a bit grimy - which suits the bike nicely. 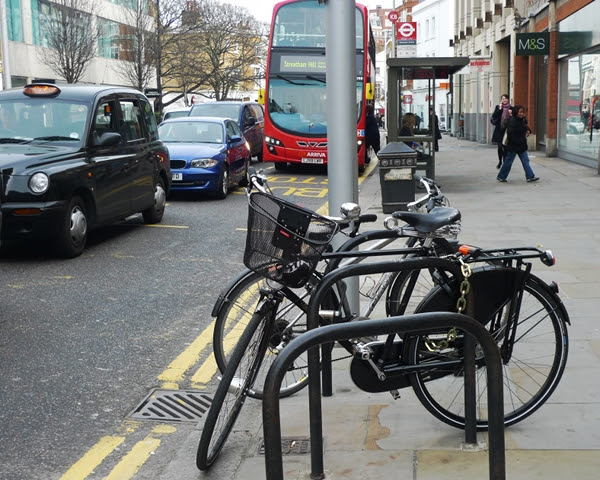 Just blocks away, I spotted a Pashley Roadster. The owner added a wire basket to the front. 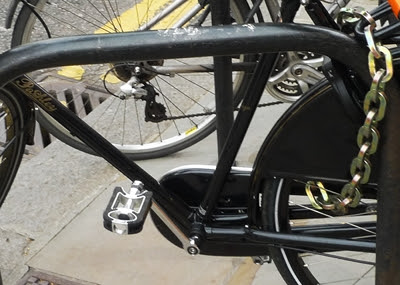 The Roadster was locked to the rack with an enormous golden chain, and a U-Lock. The owner must like it as much as the Co-Habitant likes his. 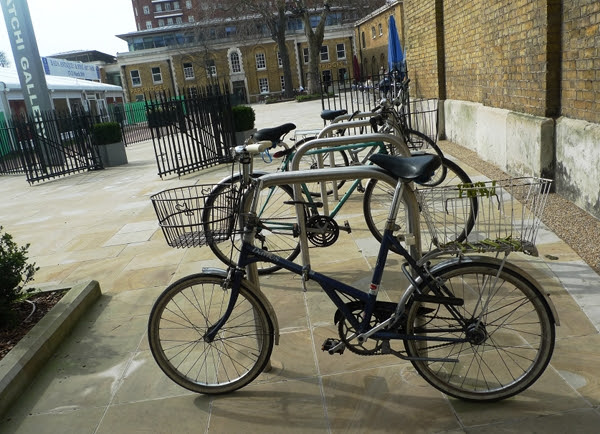 Not one, but three Dawes bicycles were locked up outside the Saatchi Gallery. 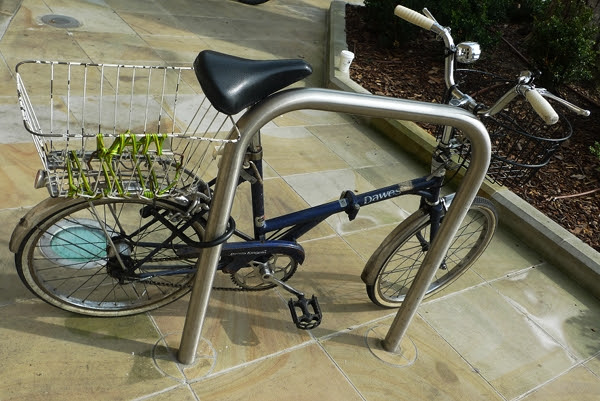 The most interesting of them was this Dawes folding bike, I assume from the '70s. I have never seen one of these before and wonder how it rides compared to the Raleigh Twenty. The owner's installation of enormous baskets, front and rear, suggests that they use the bike as a "shopper". 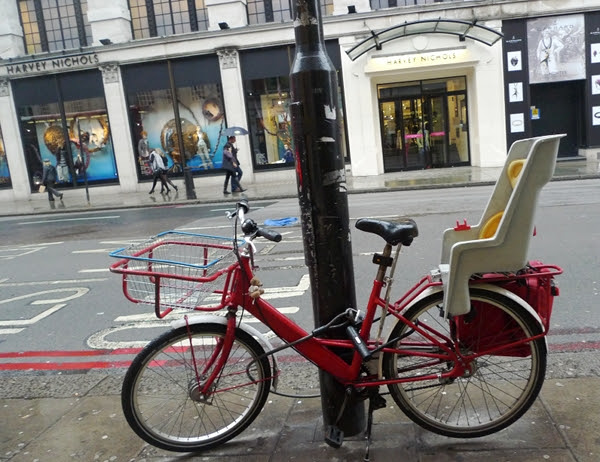 And finally, behold this magnificent Pashley Mailstar, across the street from Harvey Nichols. 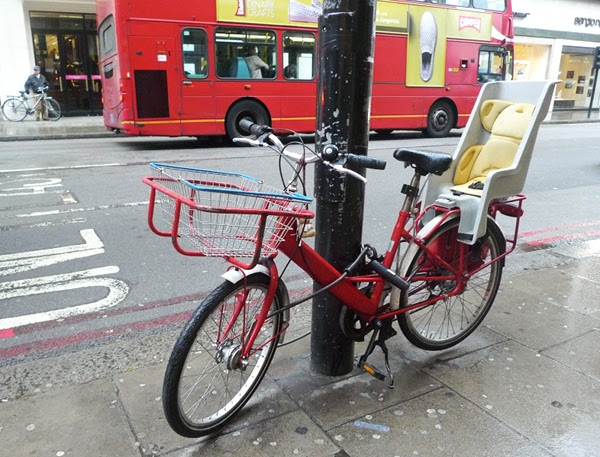 The Mailstar is a mail delivery bicycle (read more about it here), but this one has obviously been converted to a family cycle. I wonder whether these are available for purchase by the general public, or whether the owner bought a de-comissioned mail delivery bike? Either way, it is pretty cool and, I bet, extremely steady to ride. 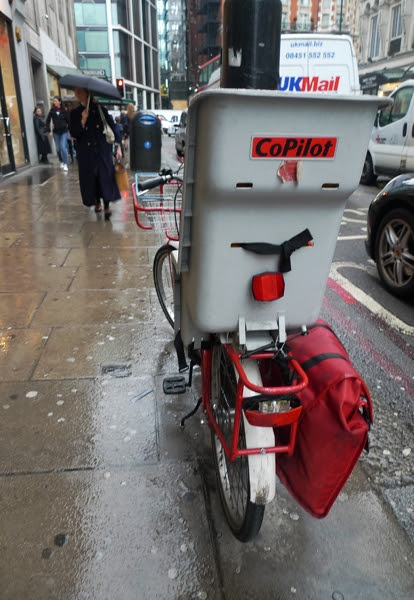 To my eye, not much has changed in London since I was last here - aside from the obvious things, like the new St. Pancras station. Perhaps people seem a bit more relaxed and "loungy" than what I remembered. And I had forgotten how exciting "the High Street" can be.

As for cycling infrastructure - I did not see any. Aggressive, chaotic driving dominates the roads. To me it all looked quite scary and entirely uninviting. All the beautiful bikes I photographed were in neighborhoods that are fairly manageable microcosms - but even those neighborhoods had more cyclists on roadbikes wearing neon than "regular people cycling".

I can not compare this to how things were in London five years ago, since I did not pay attention to bicycles then. But it would be interesting to hear from Londoners. Is there a trend on the rise, like in New York? Or have the Pashleys, Raleighs and the many loop-frame Dutch bikes I saw been there all along? 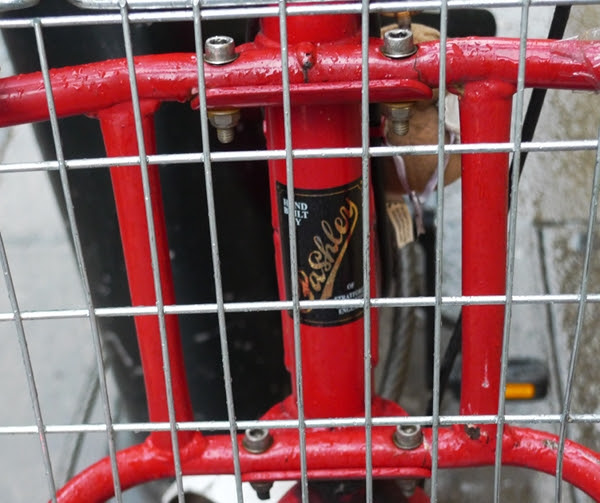 Whatever the case may be, thank you England for continuing to make beautiful handbuilt bicycles and I hope to see even more of them on the streets of London in the future.
Labels: Pashley travel urban cycling