I was in Brussels and London over the past few days. Am exhausted, but here are a few velo snaps from the land of waffles, chocolate, the European Commission, and Eddy Merckx. London pictures will follow in the next post. 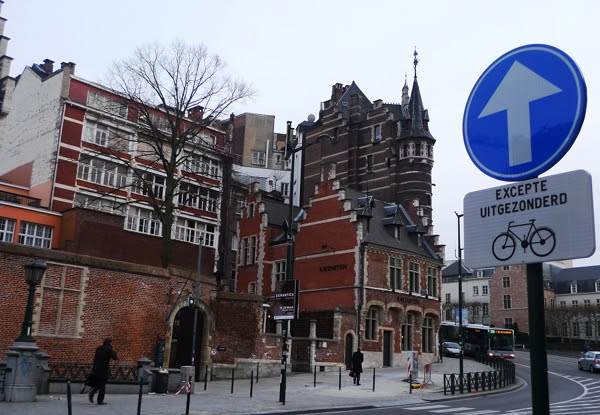 I have been to Brussels many times, and not once have I seen the city sunny. So my main association with it - whether deserved or not - is darkness: dark sky, dark buildings, dark trees, dark chocolate... 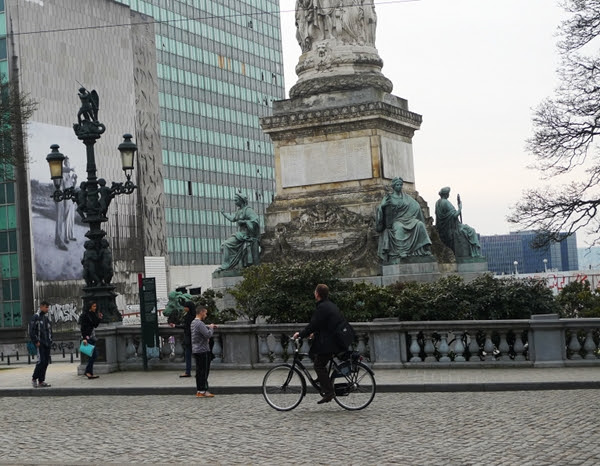 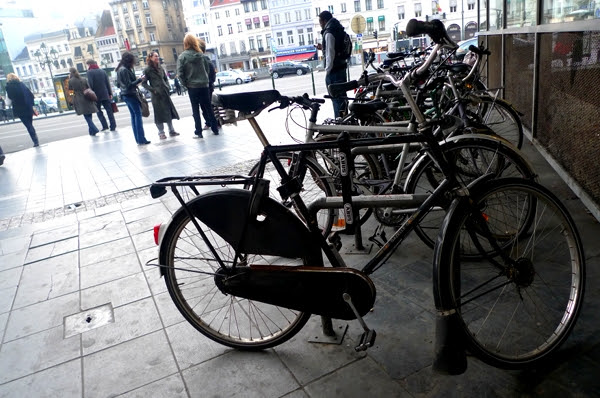 A black Gazelle chained up in the city center. I saw many Dutch bicycles, from brands both known and unknown, as well as many modern hybrid bikes. To my dismay, I did not see a single bike by the Belgian manufacturer Achielle. 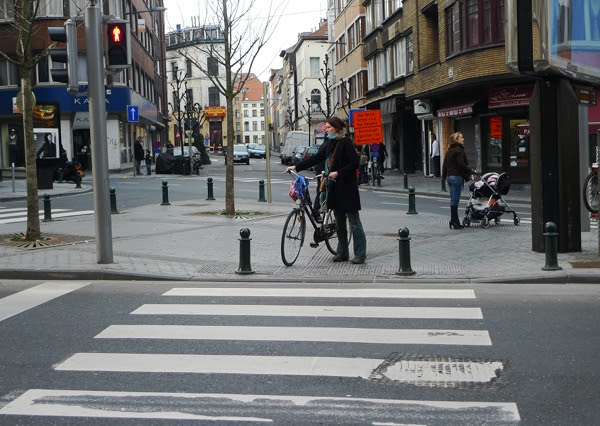 The bicycle infrastructure looks similar to how things are in Boston: occasional bike lanes and "sharrows". Mostly, bicycles share the road with cars, buses and trams. On large streets you mostly see roadbikes, because the bicycles really need to be going quite fast in order to blend into the flow of traffic. On side streets you see more of the Dutch bikes, since the traffic flow is less hectic. 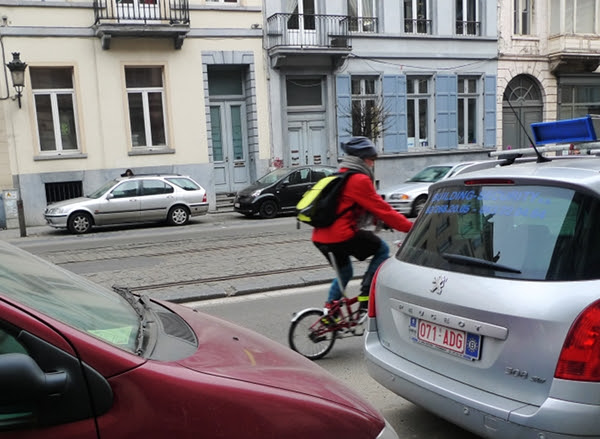 One trend I noticed is the huge number of people riding folding bikes. There are definitely more folding bikes in Brussels than in other cities I have been to recently, and it's funny to see how aggressively they are maneuvered through the streets. I also saw at least a half dozen women whose outfits matched their folding bicycles, but alas I was quick enough to photograph only this red on red number. Notice also how the yellow panel on the backpack matches the yellow strip on the bike. 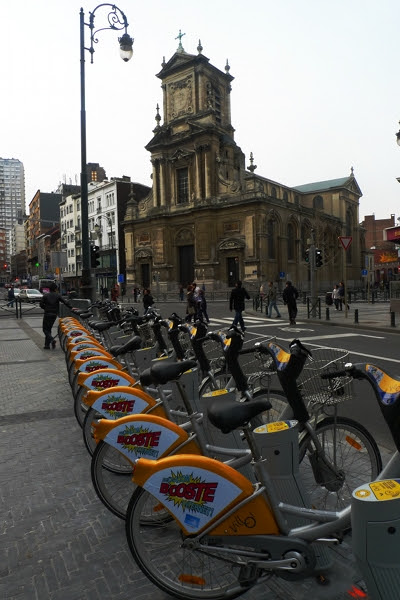 And then of course there is Villo, the Brussels bike share programme. 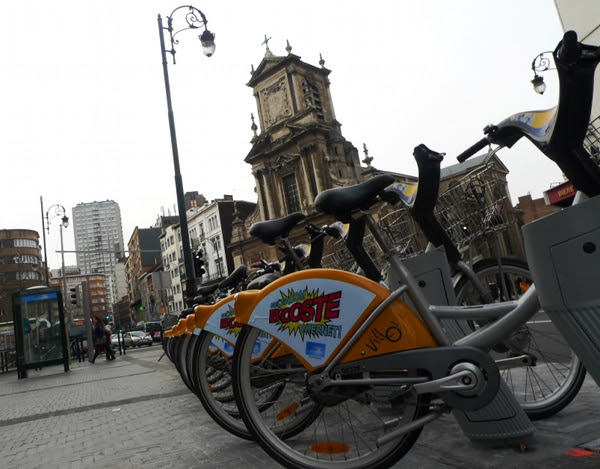 The Villo bikes look to be in spectacularly good condition compared to the Vienna Citybikes and the Paris Velib bikes I have seen. Not sure whether this is because vandalism is less prevalent in Brussels, or because the bicycles are newer. 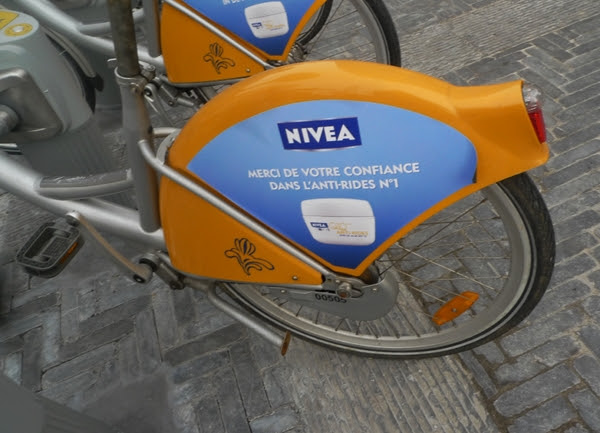 Adverts are featured on the dressguards - but to my eye, these are not as overwhelming as the ones on the Vienna Citybikes. I also quite like the Iris emblem. 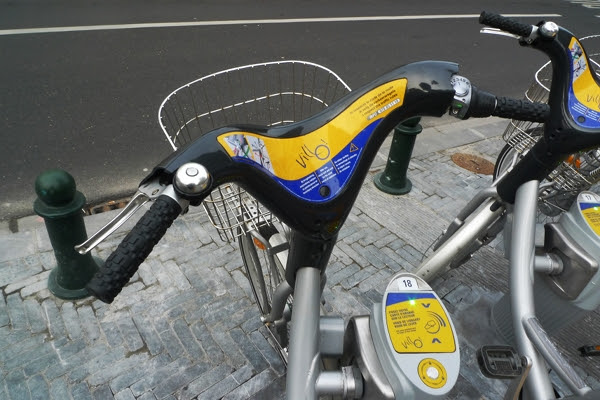 I had a very precise schedule while in Brussels, and cycling was not on the agenda. As for using the Villo for transportation - one of the main obstacles for me was the same as for Vienna Citybike: The basket will not fit my bag - which is a standard briefcase/laptop size bag - and it is not the sort of bag that can be carried messenger style. When I mentioned this in a post about Vienna's Citybike, I received some aggressive responses (that I subsequently deleted together with my defensive replies): Basically, a couple of readers criticised me for "whining" about this issue, and for carrying an "impractical designer bag" in the first place. Not that I need to justify myself, but my bag is actually a conservative, modest briefcase-style bag with no visible designer labels. This type of briefcase-style bag is standard to use in my line of work, whereas a messenger bag or backpack is not. Especially in cities like Brussels and Vienna - where so many professionals arrive for international meetings and conferences, such bags are prevalent. Therefore I do not think it is unreasonable to suggest that when designing a bike-share bicycle, its basket is made to fit a standard laptop-sized bag, for those who do not carry backpacks to work. If a system is designed "for the people", it seems useful to understand what factors encourage said people to use it vs what factors prevent them from using it. 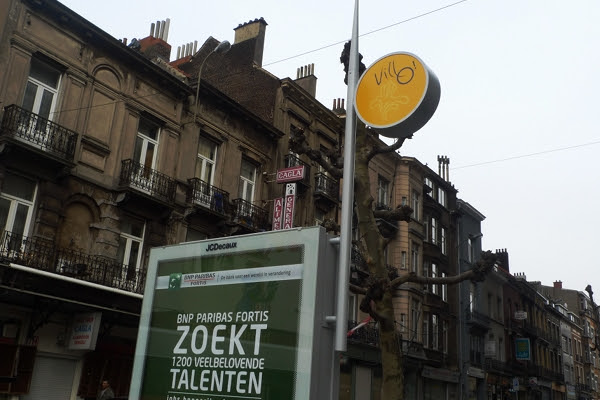 I did not have a chance to visit my favourite places in Brussels on this trip, but at least I walked around a bit between my meetings. Brussels is a city that I like very much, but cannot imagine living in: Everything seems to be centered around EU activities and this gives it a certain hectic and bureaucratic feel even when things are quiet. I also find it disorienting that French and Dutch are used interchangeably (though the city is technically French-speaking), with occasional English and German thrown in as well. For these very reasons, I think it is essential to visit Brussels if you have never been. Its atmosphere is in many ways crucial for understanding today's Europe. It is a very easy city to visit and to get around - with excellent food, regal parks, beautiful architecture, and walkable streets.
Labels: social commentary travel urban cycling