After a night of snow that continued through the morning, I thought for sure this would be a day of working at home. Then suddenly the snow stopped and it grew warm and sunny. And just as I stepped outside to get some coffee, the Co-Habitant came home early due to a change in his schedule. Our eyes met and we knew at once what the other was thinking: Bike ride! 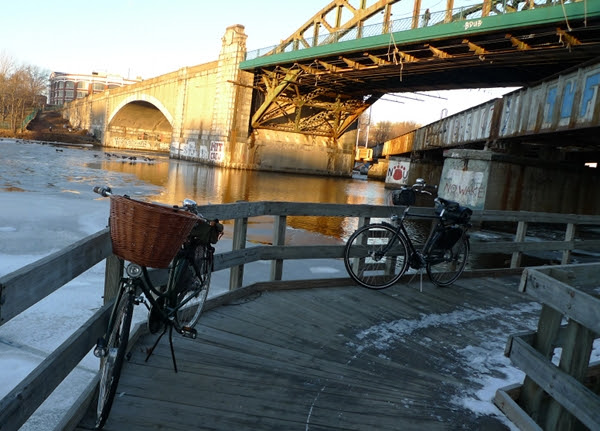 This was the first time we've been on a real ride together in weeks. The Pashleys were ecstatic to finally roam freely in each other's company. 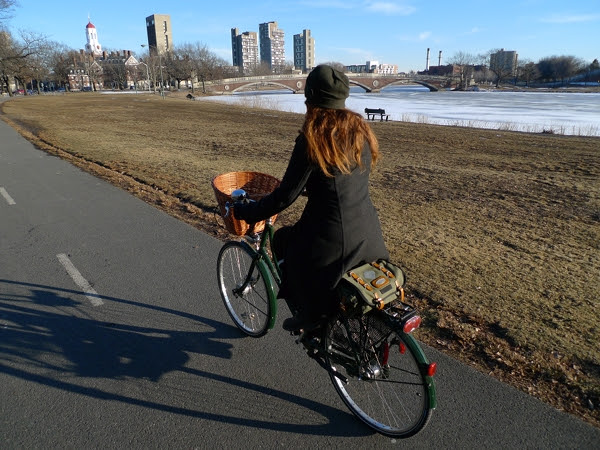 It grew so unseasonably warm, that the snow was all but melted by the bright sunlight. 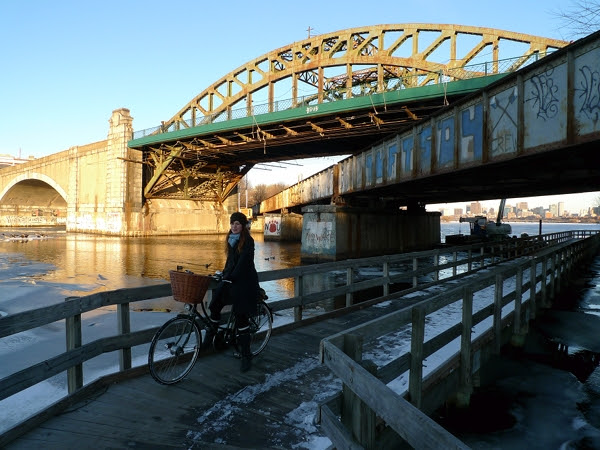 Only this treacherous footbridge really posed a problem, as it was covered with patches of ice and hard snow. The Co-Habitant sped through it as if it was nothing, but I was more cautious after seeing one jogger after another slip on the ice patches. 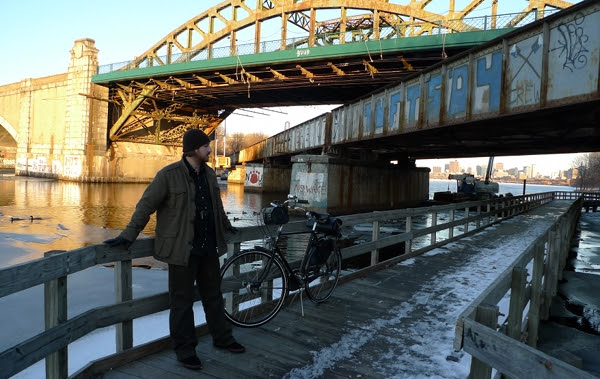 When the sun began to set, it was one of those golden sunsets and the views were just beautiful. 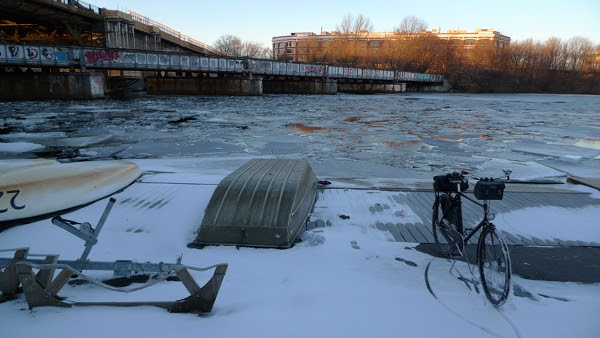 I especially love the sun's reflection in the ice formations on the Charles River. 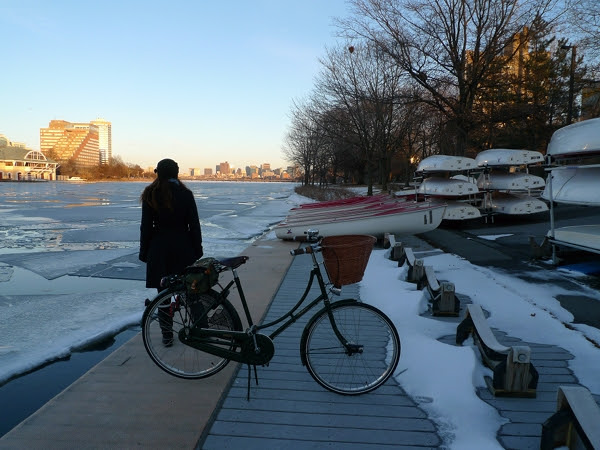 Sunlit cityscape in the distance, with that massive field of cracked ice stretching towards it. So magical. 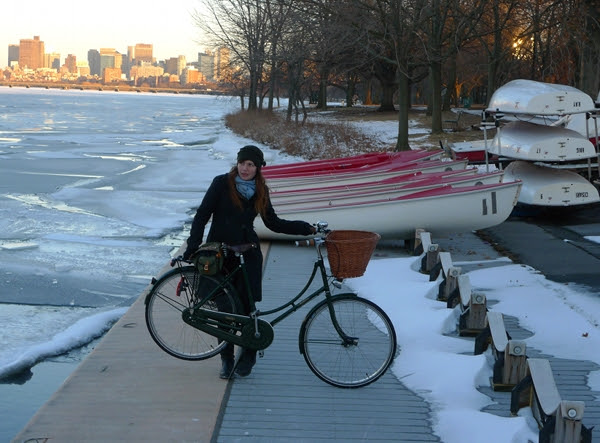 As the sun set, we rushed to complete the trail loop so as not to be caught there in the dark. The Co-Habitant rides like a maniac, even on the slow and stately Pashley. He is much too fast for me, but I am too arrogant to ask him to slow down - so I brace myself, lean forward on the handlebars (this must look quite comical), and pedal as hard as I can. This time I even passed him a couple of times, which made me realise that riding the Pashley exclusively over the winter months, if only for commuting, has had some effect on my strength. He also complimented my improved leaning technique on turns, which pleased me immensely. Leaning on turns is one of those things that didn't come naturally at all. I guess now I finally got it, because I no longer have to think about it - the lean just happens and I even hold the inner pedal up without realising that I am doing it. It must seem silly to be excited by this, but you have no idea how uncoordinated and unathletic I am. The next goal is to conquer the "steer with your hips" thing. Maybe. 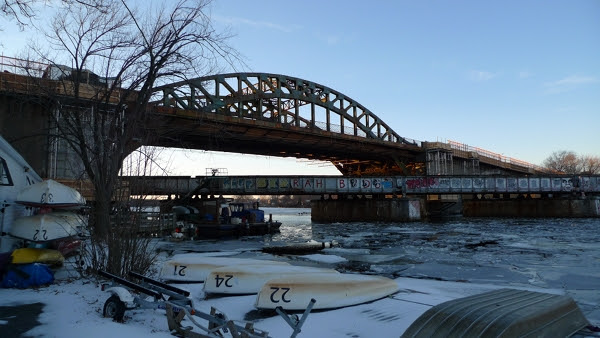 Our sun-drenched afternoon gave way to a surprisingly frigid evening, and after getting off the trail we hurried to seek shelter in a cafe. Once inside, I collapsed on the armchair - realising that I was completely depleted of energy. I was revived by hot coffee and a piece of dark chocolate, but unfortunately once we got outside it was even colder than before. We rode home with incredible speed just to warm up. My legs are now mush and I am so tired I can't think straight - but the ride was a welcome surprise in what has been a decidedly low-intensity season. 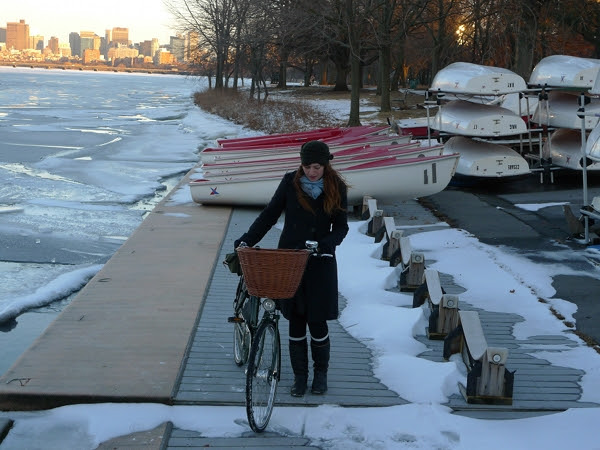 Next week I am leaving for Austria again and will be there for a month. Hopefully, when I return to the US spring will be in the air and I will be able to go on long rides again as often as I like. In the meantime, today's wonderful ride will be a nice thing to remember while I am abroad. And I have reason to believe that this time I might actually have a bicycle of my own while in Vienna - the person whose place I will be renting might have a spare. Either way, Lovely Bicycle shall continue relatively uninterrupted as it goes international again.
Labels: Boston Co-Habitant Pashley trails winter cycling