Review of "Spoke Count" at the Chorus Gallery

On Saturday night I stopped by the opening of Spoke Count, a group exhibition at the Chorus Gallery in Somerville Mass., which is affiliated with Open Bicycle. As someone who has both exhibited at and curated a fair number of shows, I thought it would be interesting to write an informal review of this one. Despite my friendly affiliation with Open, I believe that I can be objective, and I hope the organisers of the show will not take offense at anything expressed here. 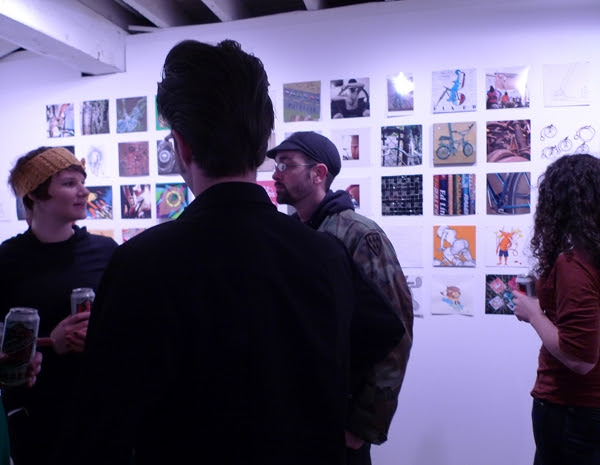 Spoke Count is a collaborative installation of over 100 small works about bicycles, submitted by local artists. Each piece is no greater than 8" in one direction and the work is arranged in a large grid along the gallery's main wall, in much the same manner as we are accustomed to seeing a set of "thumbnails" in a virtual image gallery. 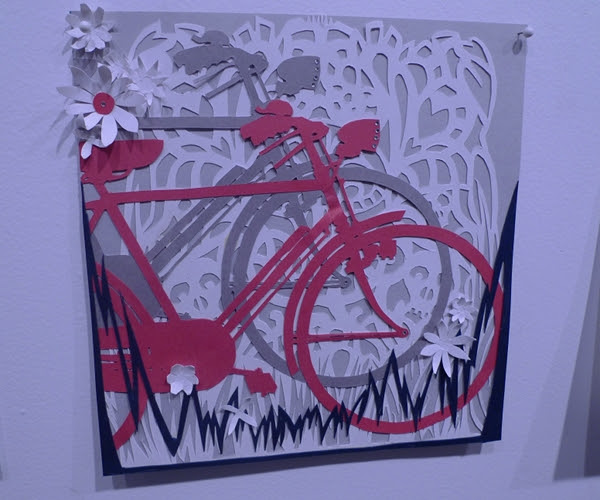 I felt that arranging the work in this way made an impact on several levels. In the most basic sense, it illustrated the sheer variety of possibilities when the concept of "bicycle" is evoked. Submissions included images of vintage 3-speeds, slick track bikes, stately roadsters, and even penny farthings. 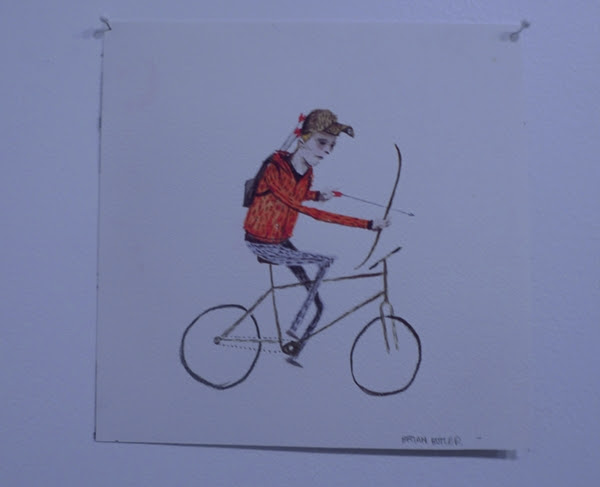 Additionally, it showed the variety of personalities of the people who ride bicycles. The type of artwork a person makes, the colours they choose, the themes they portray - all of this is information that gives the viewer a glimpse of the artist's inner world. 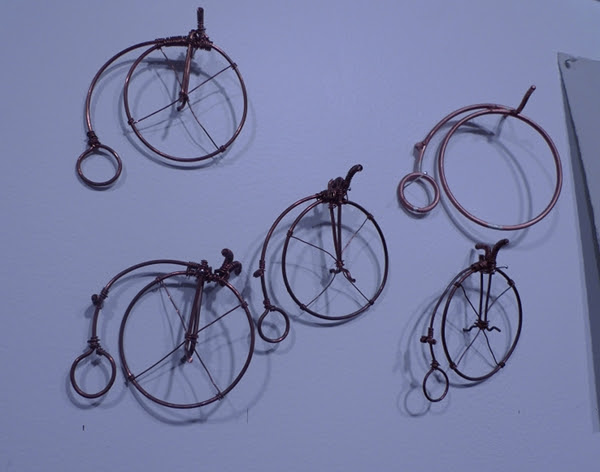 There were many, many different inner worlds on display, rather than just some single stereotypical notion of "cyclist". 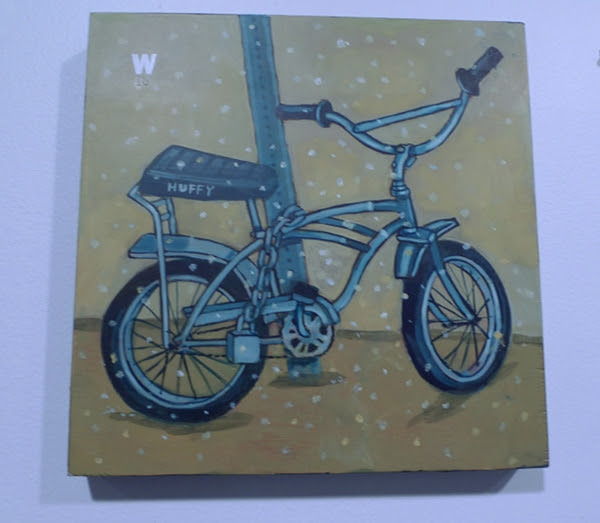 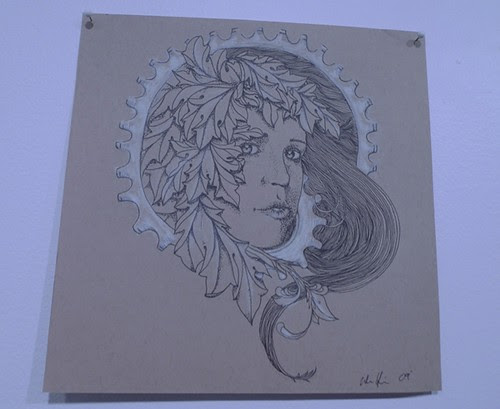 And the fact that all the pieces are the same size and priced equally, communicated the idea that everybody's vision of "bicycle" is equally valid, equally important, equally valuable. 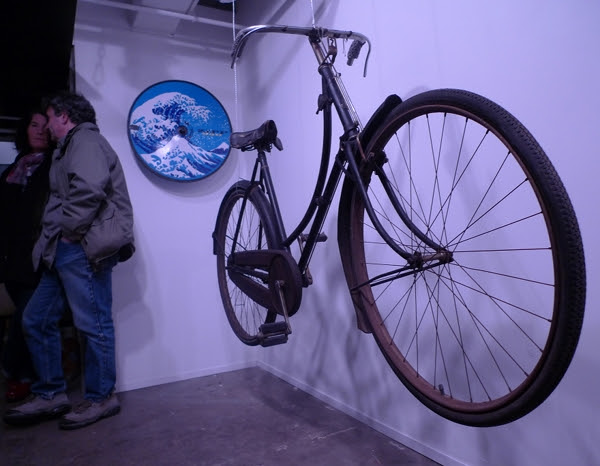 In addition to the grid of small works on the main wall, Spoke Count displays several bicycles that are of historical interest. These hang suspended from the ceiling, their gentle swaying evoking the comparison of cycling to the feeling of flying. Among the bicycles on display is my 1936 Raleigh Lady's Tourist (not for sale). 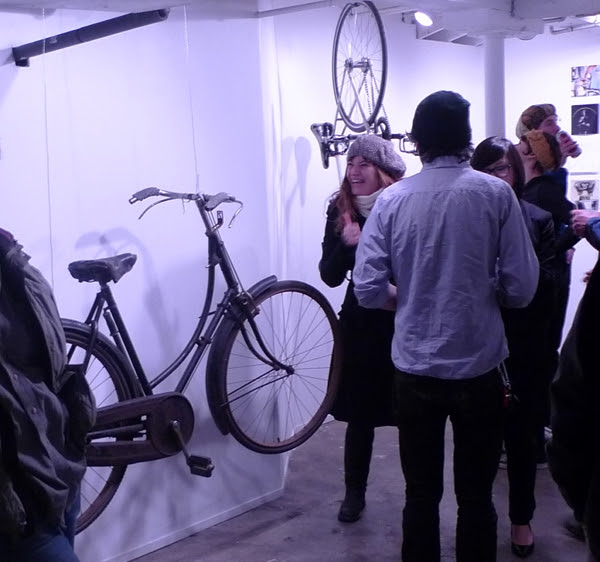 All in all, I felt that Spoke Count is a successful exhibition both in terms of the way it is put together and in terms of what it communicates. An additional question that is often asked in a themed show like this, is whether it stands on its own as an art exhibition per se, rather than just being a show for bicycle enthusiasts. For the most part, my answer to that would be "Yes". Joshua Kampa knows what he is doing when it comes to aesthetics and critical theory. And in terms of relevance, Spoke Count succeeds as a meditation on a significant social change that is currently taking place in the community. It is a small, cozy show that does not attempt any grand gestures. And yet it sends a strong, personal message. 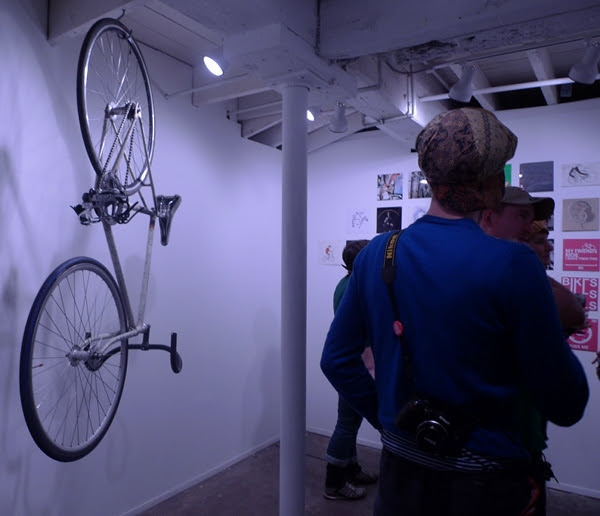 In general, I would describe the Chorus Gallery not as a place that exhibits "bicycle themed art", but as a gallery featuring a diverse selection of young local artists whose work is occasionally related to the theme of bicycles or self-propelled movement. Having said that, one thing I believe would help the gallery affirm itself as a community art space, is making an effort to reach out to a more diverse audience. The openings at Chorus are always exceptionally well attended. But in some previous ones I have been to, there was a feeling that all the attendees knew each other and that the event was more of a party than an art opening. And while such an atmosphere is fun and full of energy, it can feel alienating to visitors who have come to see the art and are not part of "the scene". At Spoke Count, I noted a more diverse group of visitors than at previous openings, and I hope this trend continues. As a community art space in Union Square in Somerville, the Chorus Gallery has tremendous potential and I am looking forward to its future shows.
Labels: art Boston local bike shops vintage