Meeting of the Roadsters 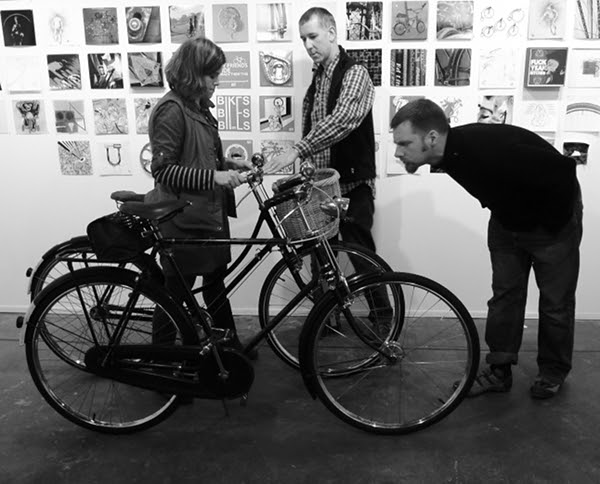 Last Saturday night, we had an informal get-together to discuss forming the vintage bicycle society I mentioned last week. There were four of us in total: somervillain, Cycler, Astroluc, and myself. I will take this opportunity to showcase my remarkably photogenic acquaintances and some of their bikes: 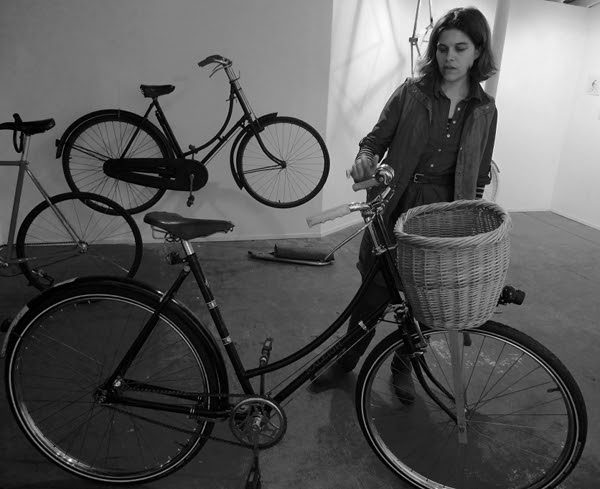 This is Cycler from Biking in Heels, with her recently acquired Raleigh DL-1. Cycler is an architect living in Cambridge and commuting to work downtown. The Co-Habitant is an avid reader of Biking in Heels - He especially likes it that her posts about bikes are supplemented with descriptions of her cooking. 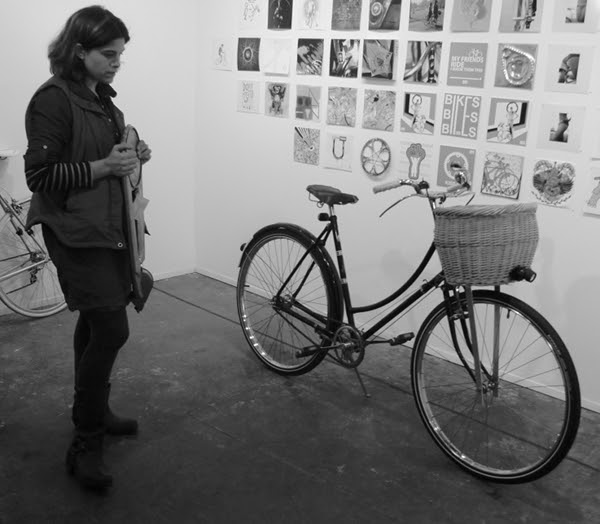 Cycler's DL-1 is an earlier model than mine, but in better cosmetic condition. I wish I had this earlier model - or at least the decals from it - because the lettering is more attractive than on mine. I also covet her cream-coloured handlebar grips. Cycler is pretty handy at DIY and even made the basket support for this bike herself. The wicker basket is attached with zip ties and seems stable; the headlight is mounted directly onto the basket and reminds me of a camera. Cycler is having an issue with her chaincase, whereby the one she ordered does not seem to fit her bike. Sadly, she discovered this only after stripping the chaincase of paint in order to have it re-powder coated. Not sure what she will do now, and this was a big topic of discussion. 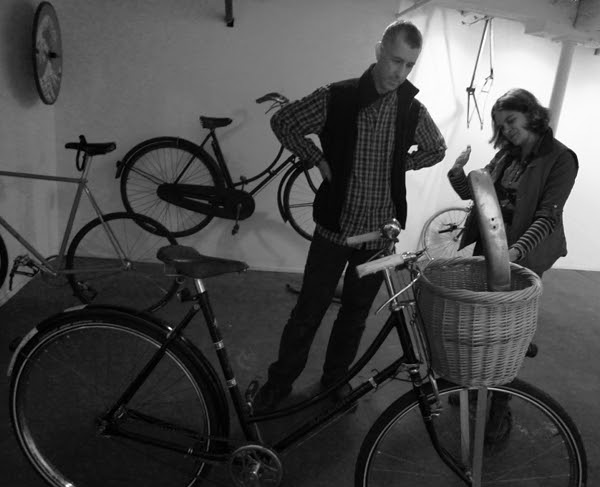 I have already introduced you to somervillain, who has a beautiful collection of vintage bicycles that I am slowly working through photographing. He had things to say about Cycler's chaincase issue and many other DL-1 related things. The resident DL-1 Guru, he knows pretty much everything there is to know about these bicycles; I continue to be amazed. 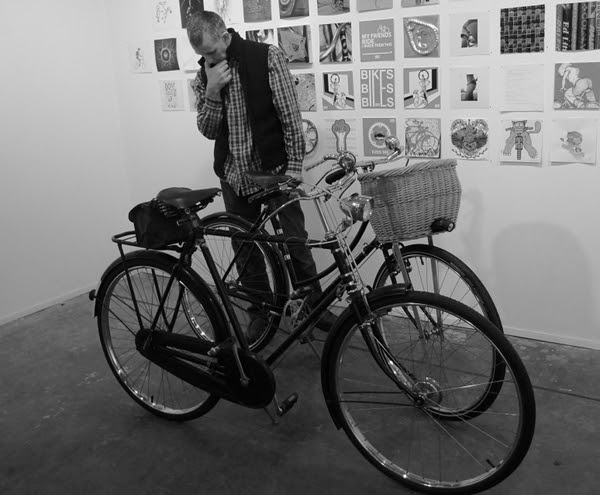 Here is somervillain's DL-1 next to Cycler's. You have already seen this beautiful bicycle here, in full colour. Somervillain is a research scientist by career who in the past few years has discovered the richly rewarding satisfaction of rebuilding vintage bicycles. He commutes from Somerville to Cambridge year round, in the winter riding his "Cannondale beater". 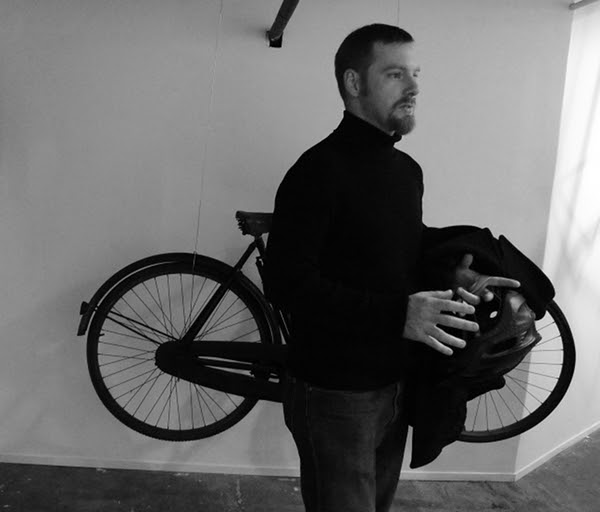 And finally, I introduce Astroluc: "Hack Artist Extraordinaire ...who also likes bikes". I admit that I was taken aback by how gallant and polite Astroluc is. Not that he is not gallant or polite online - but, well, in person he is even more so. Astroluc does not own a vintage Roadster ...yet, but is considering acquiring one. For now, he commutes around Boston year-round on his sporty Cannondale and reports all sorts of fascinating local sightings on his blog. 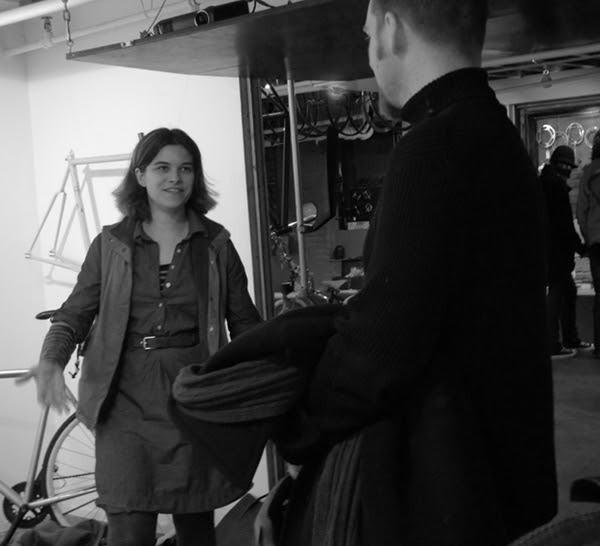 We are still fleshing out our ideas about the club and it's moving along nicely. Next time we look forward to meeting several others who could not make it to this meeting, and hopefully the Co-Habitant will be able to join us as well. Just as soon as we settle on a name for the club, we will cobble together a website where our goings-on will be documented for the benefit of members and far-off readers. Stay tuned, and get in touch if you'd like to take part. 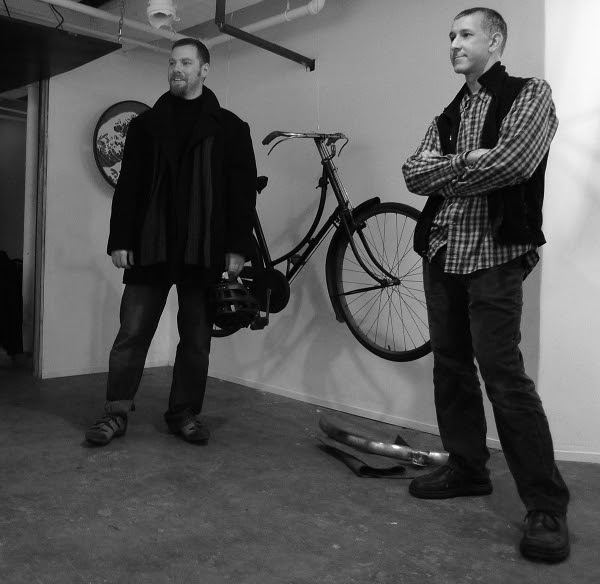