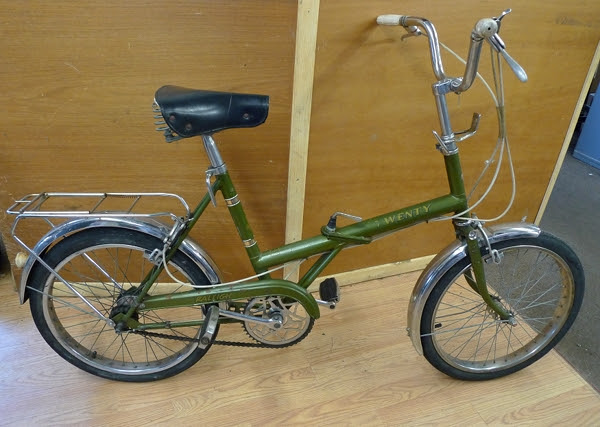 Behold the glorious Raleigh Twenty: a famous and handsome ancestor of the current generation of folding bikes. I spotted this bicycle outside of Bicycle Bill in Allston, MA and could not resist stopping by to try it. It is in excellent cosmetic condition and the price they are asking for it is very fair. Had I come across it a couple of months ago, the bike would probably have been mine, but at the moment I can't afford it. Still, we had a good time together while it lasted. 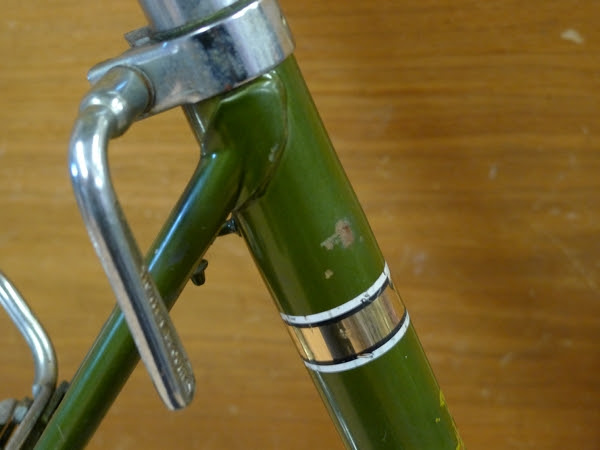 The Raleigh Twenty was produced between 1968 and 1984, reaching its height of popularity in the mid-1970s. It was Raleigh's answer to the more complicated and expensive Moulton. The name "Twenty" comes from the 20" wheel size, and it existed in both folding and non-folding versions. These bikes came in a range of colours, but the classic Raleigh green is my favourite. This particular model was produced in 1972 (according to the hub) and is a 3-speed with the typical Sturmey Archer AW hub and caliper brakes. As you can see, this one is the folding version. The lever on the horizontal tube is used to fold the bike in half. The levers on the seat tube and head tube are used to retract the seat post and handlebar stem. I did not try to fold it up in the store, but you can see some images of it folded here. 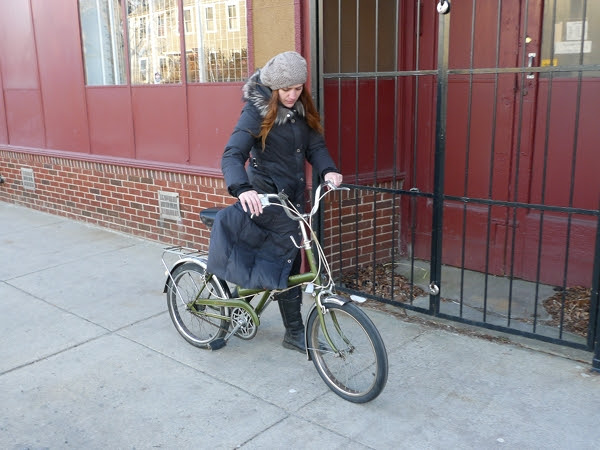 I had seen Raleigh Twenties in person before, but this was the first time I examined one closely and rode one. As first impressions go, it is certainly a charming bicycle: The handlebars look like antlers and somehow the bike seems to be always smiling. Just a friendly little reindeer, waiting for you to ride it...
The Twenty is large compared to current notions of a "folding bike". To me it felt more like a children's bike or a bike for a very short person. It is also quite heavy, and so I don't think it would really be functional as a folder in the sense that you could easily carry it around on your person after folding it up. However, I think it would be functional for travel: When folded, it could easily fit into the back seat of any car or, I imagine, into a large suitcase for airplane travel. It will also take up considerably less space in your home than a full sized bike. You could store it in a closet or behind some large piece of furniture. What the Raleigh Twenty lacks in compactness, it makes up for in performance. Sheldon Brown described it as a bike with 20" wheels that performs like a 26" wheel Raleigh Sports. I agree with this assessment. Had I kept my eyes closed, I would not have been able to tell the difference between the ride on my formerly owned Lucy Threespeed and this bike. Somehow the small wheels do not feel small once you are riding the bicycle. 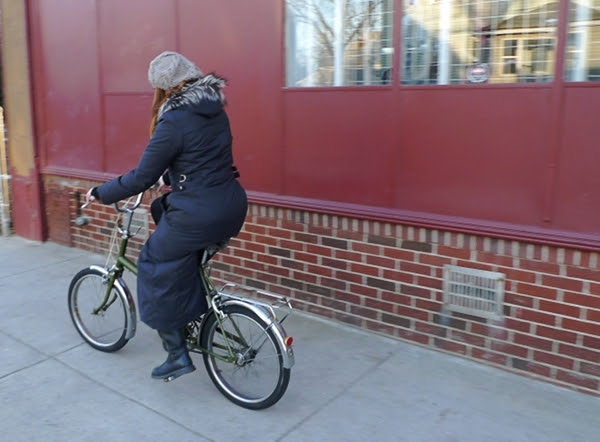 But what really makes the Raleigh Twenty functional as a "regular bike" are the extras: It is fitted with fenders and a large, sturdy rear rack. It was popular to affix baskets and panniers to this bike and to use it as a grocery-getter. It accommodates both front and rear loads comfortably and was even marketed as "The Shopper". All in all, I would recommend the Raleigh Twenty as a fun, simple and useful town bike, especially if you are on the shorter side and are having trouble finding bicycles that fit you. The fact that it can be folded up for travel is an extra bonus. Of course in addition to its practical benefits, the Raleigh Twenty is quickly becoming a cult collector's item. However, don't let that stop you from riding it!
Labels: Raleigh small wheels test rides vintage