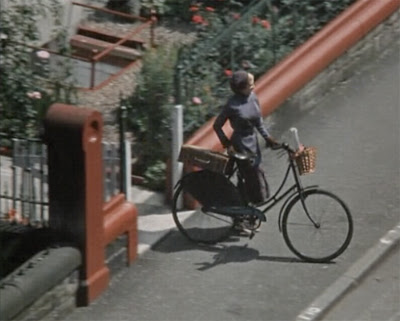 Don't know whether others have seen the classic film, The Prime of Jean Brodie, based on the novel by Muriel Spark. It ends badly, and the main character - a deluded school mistress in 1930s Scottland - is not somebody one would strive to emulate. But I do admire her beautiful cycling skills! In fact, the opening scene of the film - where Miss Brody is shown gracefully cycling to the school where she teaches on a loop-frame bicycle with a basket - has no doubt influenced my own choice of bicycle and my notion of what "riding a bicycle" should be like. So here are some stills from the sequence that inspired me. 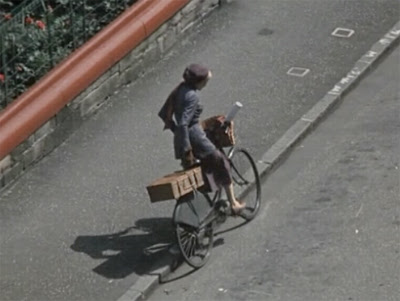 Miss Brodie mounts her bicycle with ease using the proper Sheldon Brown method. Her long, narrow skirt does not seem to impede the mounting maneuver one bit. 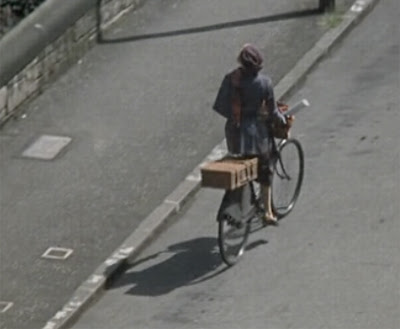 Notice how straight her leg is on the pedal as she cycles: completely extended. She would definitely not be able to reach the ground with her toe in traffic. 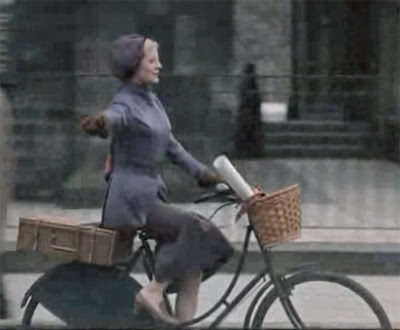 Ah, here she indicates that she is about to stop. Look at all that stuff on her bike! Rolls of paper in the basket, and what looks like a wooden trunk strapped to the rear rack. You can hardly tell due to the bad quality of these images, but it looks like her bicycle has all blackout parts on it. Does anybody know what year they began doing that? 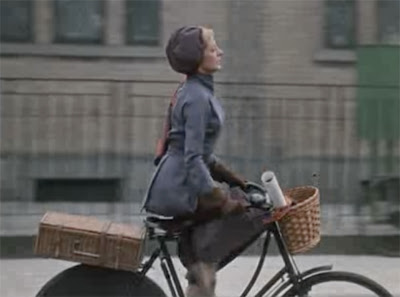 To get off the bicycle, she takes her right foot off the pedal and swings the leg over the frame while the bicycle is still in motion. 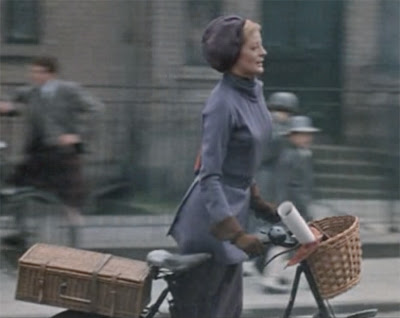 Then she coasts for a bit in this standing position - with the left foot on the left pedal and the right foot supposedly in the air next to it? - until she hops off and the bicycle comes to a stop. Impressive! - and no way can I pull that off.

In the film, one of Miss Brodie's catch-phrases was that she was "a woman in her prime" - even though she was distinctly old-maidish by 1930s standards. My theory is that her cycling is what kept her feeling young and beautiful.
Labels: basket films loop frame vintage