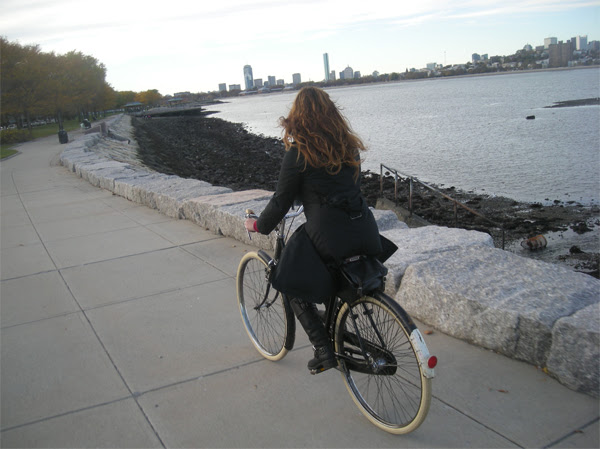 This past Sunday marked my biggest vehicular cycling accomplishment to date: We rode from Cambridge/Somerville to South Boston and Dorchester - via a 9-mile route that took us straight across greater Boston. It's by no means the most cycling we have ever done, but it was certainly the most cycling we have done through a high-traffic urban environment. (We do not attempt to photograph ourselves while riding in traffic, so these photos were taken along the South Boston waterfront.) 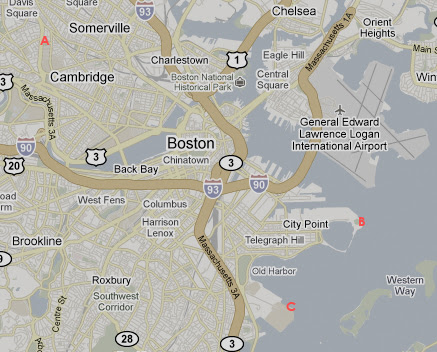 Our destination was Castle Island in South Boston, where the goal was to cycle along the Harbor path through Dorcester and back. The harbor path is quite nice and about 3 miles in length, but it is crowded with pedestrians in the summer. In early November, however, it is just perfect: Still enough people for it not to feel abandoned, but plenty of room to cycle. 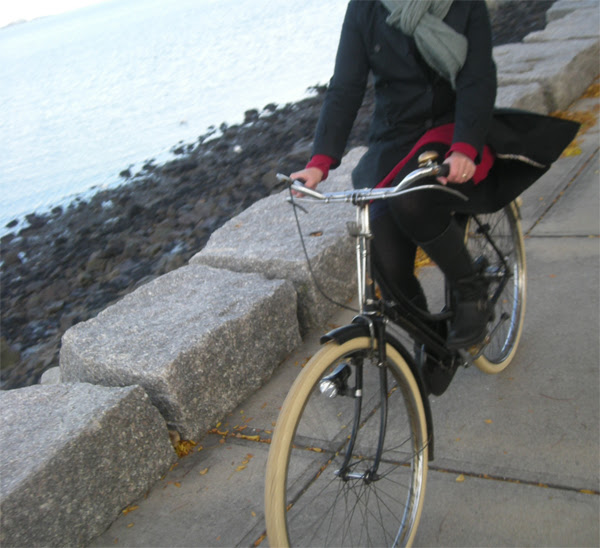 As you can tell by the photos, I was on my vintage 3-speed Raleigh DL-1 with rod brakes. No problems at all. The widely spaced 3-speed Sturmey Archer hub combined with lowered gearing (22 tooth cog) was more than sufficient for any elevation we encountered.

Oh, and I finally installed lights and a bell on this bike. The headlight is a CatEye Opticube LED mounted to the right fork blade, and the tail-lights (not visible here, but see the last two photos of this post) are Cateye Bike LD610s, attached vertically to the rear stays. The bell is a Crane brass bell. 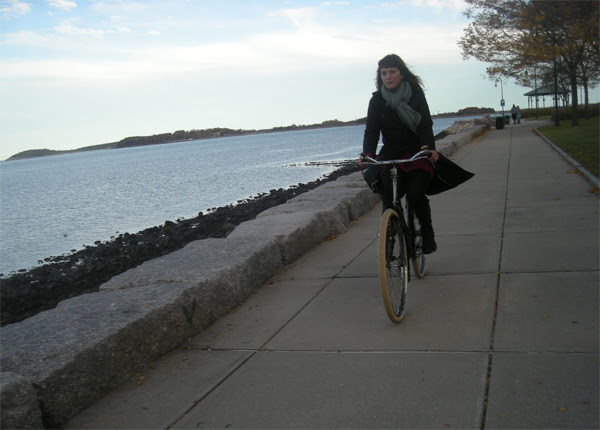 We began our ride on Sunday mid-day and there was considerable traffic, but not too bad. Interestingly, as soon as we crossed the bridge into South Boston, we got some friendly comments from local motorists. Not what I expected given the aggressive reputation of this area. I think people found our vintage bikes and dressy attire appealing - a nice thing to see on a Sunday? 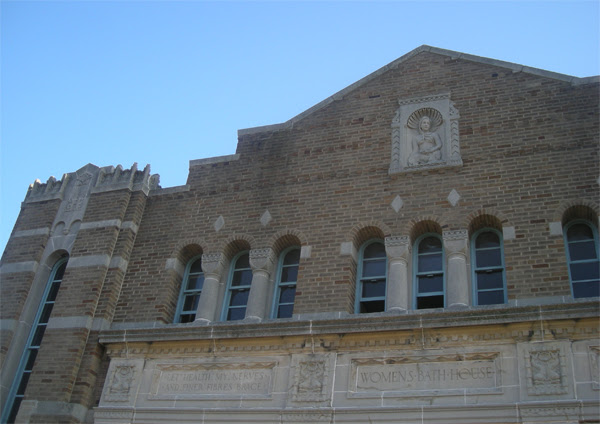 For those unfamiliar with the history and cultural climate of South Boston ("Southie"), it is an old working class neighborhood that has traditionally been predominantly Irish. And I don't mean just Americans with Irish heritage, but a considerable number of recent immigrants: you can hear Dublin and Cork accents spoken. Over the past decade, the area has grown more ethnically diverse, and some parts of it have also become "gentrified". But overall, the feeling of its historical roots still remains. The image above is the old Women's Bath House (now part of a community swimming facilities) that is located along the harbor path right before Castle Island. 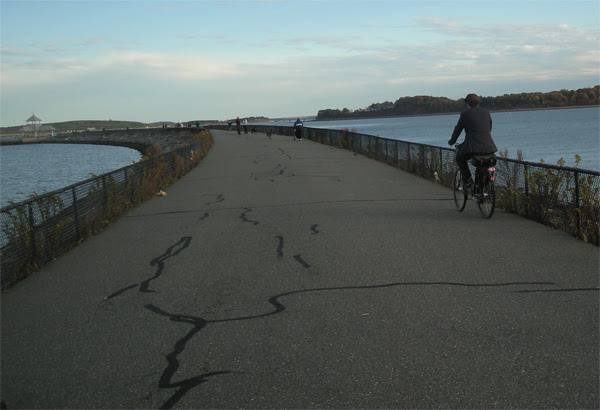 Castle Island itself (which, as far as I can tell, is really a peninsula) curls around and connects to another part of the mainland via a narrow strip of land (see point "B" on the map above). This strip does not naturally close all the way, but they built a bridge to complete the loop. The Pleasure Bay Loop is part of the cycle path and offers nice views of the Boston mainland, the harbor, and the mysterious industrial landscape of the Conley Terminal of the Port of Boston. 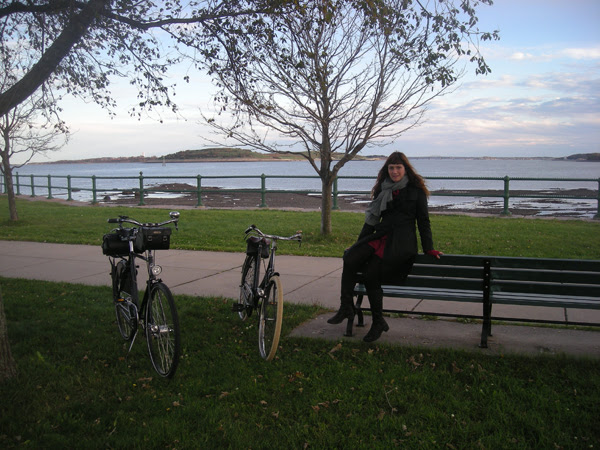 Arrival at Castle Island via the Pleasure Bay loop. Here we were approached by an elderly man who asked us about our bikes and told us that he rode a DL-1 in Ireland since the 1930s - because the roads where he lived were bad and it was the only bike that could handle them. More evidence that the DL1 makes a great "off-Roadster". The gentleman also told us that his other bike at the time was a "fixed wheel bicycle" - hard core! 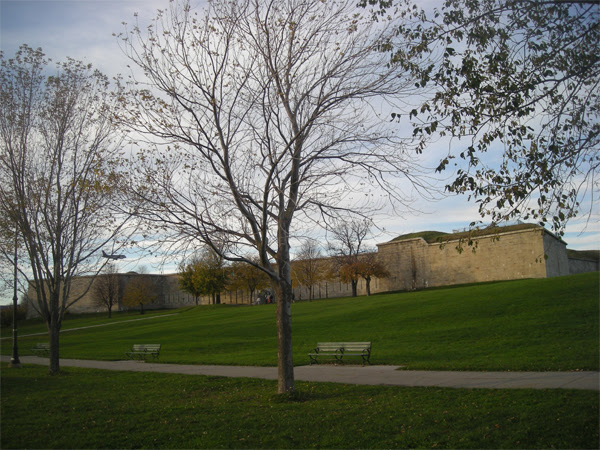 Finally, here is the real attraction of Castle Island: Fort Independence - originally built in 1634 for the sea defense of Boston. The fort is located upon a hill, and visitors climb it to sit and watch the airplanes land at Boston's Logan Airport just across the water. On the photo above I managed to capture one of the planes landing - though they look much larger and more impressive in person! The cool thing about planes landing, is that there is always a group of them, waiting for their turn to land in a cluster of lights in the sky. Then suddenly one light separates form the cluster and begins to move toward you until it grows larger and more plane-like. It really is pretty neat to watch, and Boston's Logan Airport is special in that it's surrounded by water. 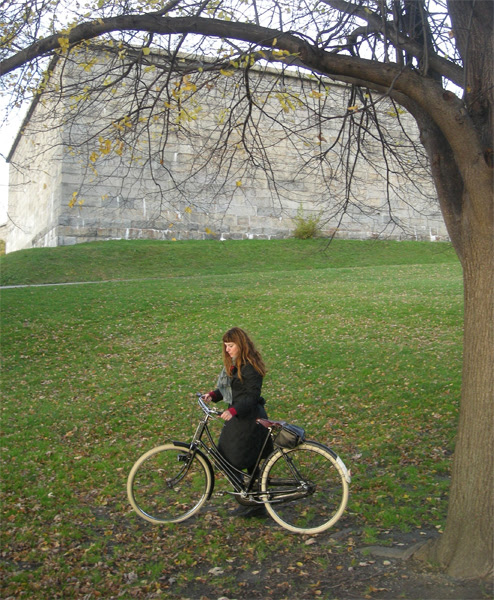 Walking my bike up the hill; a corner of Fort Independence in the background. Didn't want to cycle on the nice grass. 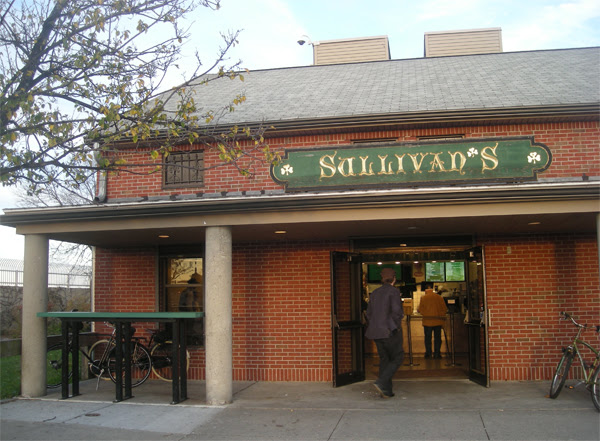 Next to Fort Independence is the legendary Sullivan's. This is a fast food place that serves everything from delicious cheeseburgers to lobster bisque (there are healthier alternatives as well, but somehow they don't seem appropriate). As you can see, Sullivan's even had VIP parking for our bicycles. The thing to do is to order from Sullivan's, then take the food to the top of the hill and dine while watching the planes land at sunset. 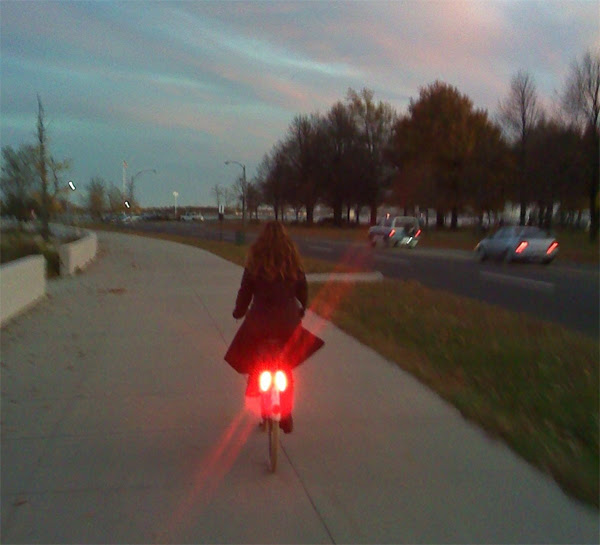 The sunsets on Castle Island are beautiful, but difficult to capture. 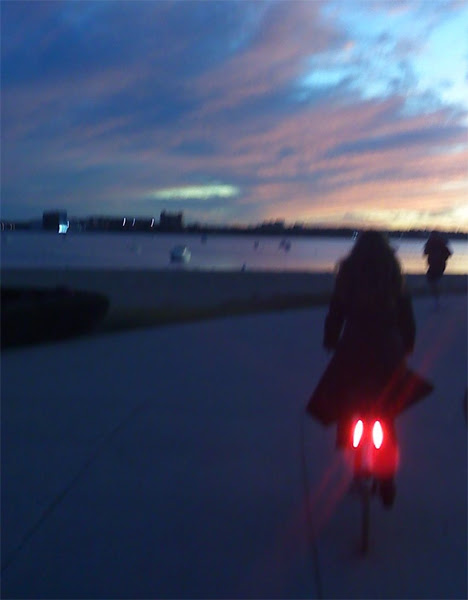 We enjoyed cycling along the South Boston waterfront, as well as the process of getting there and back. Returning home at night was particularly nice: the beautiful lights over the water, the melodic noise of traffic, the peaceful darkness. It feels good to be comfortable cycling through the city you live in.

If you are in the Boston area and want to try cycling to Castle Island, the best way to get there from the center is on Summer Street, straight to the end. Summer Street may seem intimidating, but it is surprisingly okay. If you don't feel confident the first time, go on a Sunday morning: Everyone will be either asleep, in church, or nursing a hangover. The streets will be yours!
Labels: Boston DL-1 loop frame Pashley Raleigh trails urban cycling Velouria