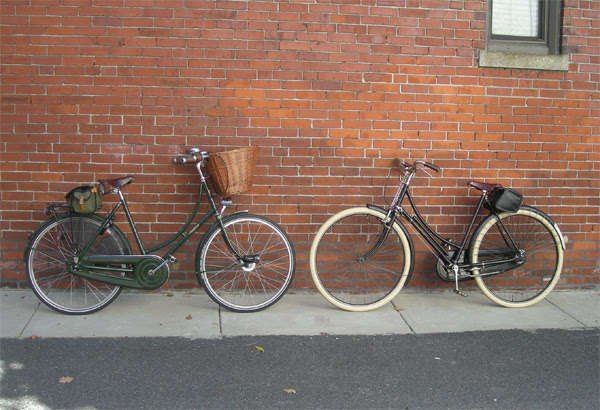 When I first posted about buying my vintage Raleigh Lady's Tourist, a reader commented that it looks like "the Pashley's grandma" and I replied that they were indeed pretty similar. But after riding the vintage Raleigh around on a daily basis for the past week, I no longer think so. Sure, the overt similarities are there: the loop frame, the upright sitting position, the enclosed chaincase and the general aura of lady-like stateliness. But the ride quality is so very different, that I was compelled to conduct a more thorough comparison. 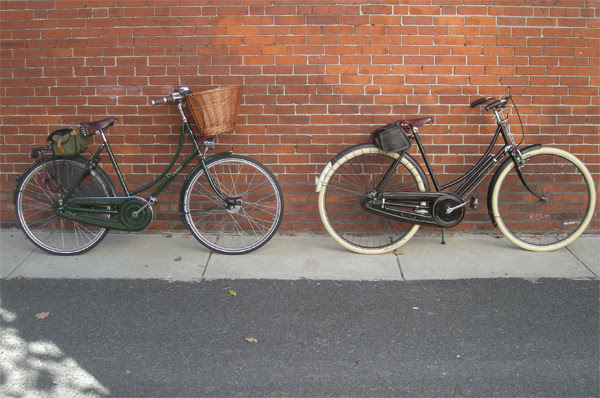 Those of you who "know bikes" can probably see straightaway that there are significant differences in proportions and angles. The vintage Raleigh's seat tube is considerably more slack (leaned back) than the Pashley's. In the photo above, this difference is undermined by the fact that I've shoved the Pashley's saddle all the way back on the rails in attempts to replicate the other bike's geometry. But if you try to block out the saddle and just look at the seat tubes, you can see it. The other major difference, is that the vintage Raleigh is "all weels", with a relatively short headtube. The Pashley has much smaller wheels and a tall headtube. 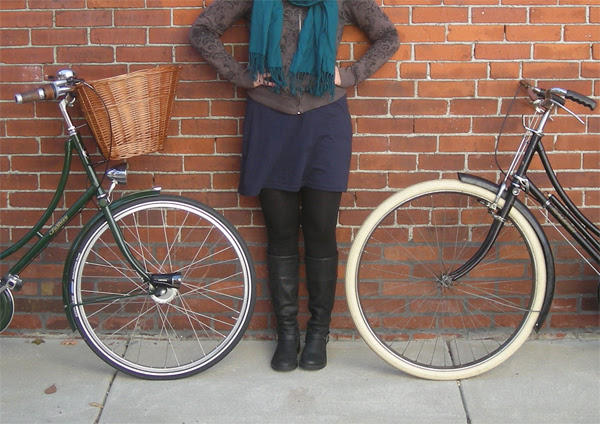 Here is a close-up of the wheels and head-tubes, with my body in between for a sense of scale. If you think there is not much difference between 26" wheels and 28" wheels, look again! The vintage Raleigh's wheels are monstrous compared to the Pashley's. Traditionally, both men's and ladies' English Roadsters, as well as Dutch bikes, were built with 28" wheels. However, lately a number of bicycle manufacturers - including Pashley, Velorbis and Retrovelo - have been fitting the ladies' models with 26" wheels, believing this to be a better proportioned choice. I am not sure whether I agree with them. What do you think? 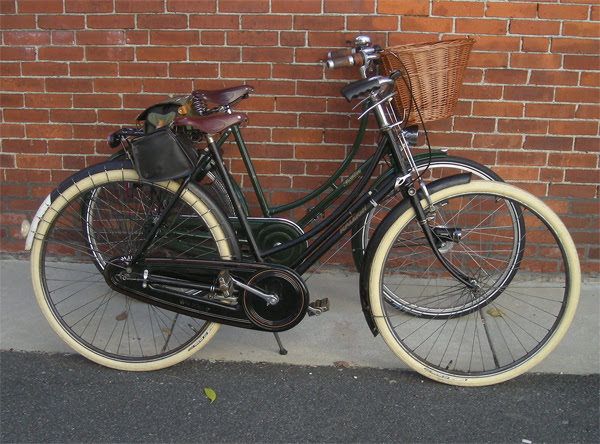 Additionally, there is more space between the saddle and the handlebars on the vintage Raleigh than on the Pashley. The difference is not quite as drastic as the angle of this photo makes it seem, but it is there. 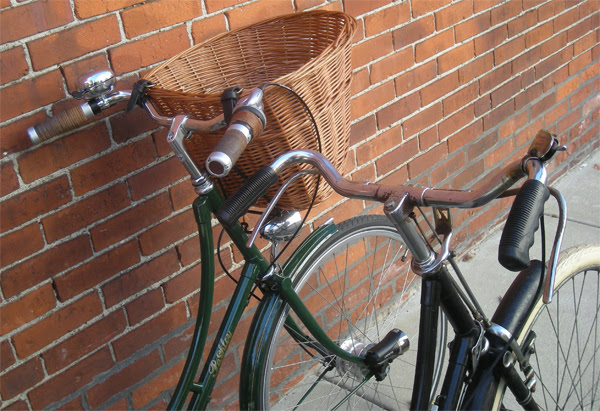 The stem and handlebars are not part of the frame itself, but differences between them should still be noted. The Pashley's stem is taller and has an additional upward-sloping extension (like the Nitto Dirt-drop/ Periscopa stem), to make the handlebars higher. The vintage Raleigh has a classic stem with a horizontal (flat) extension, which positions the handlebars slightly lower. The handlebars themselves are different as well: On the Pashley, the gripping areas are flared outward more than on the vintage Raleigh. 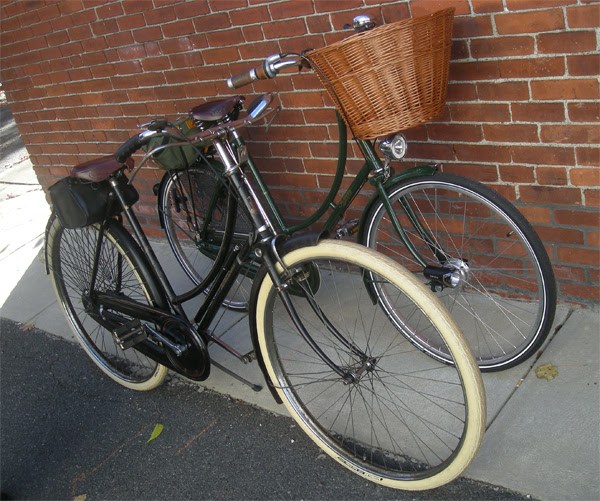 As you may have noticed in the undertones of the past several posts, I prefer the vintage Raleigh's geometry to the modern Pashley's. Of course the Pashley has superior gearing and brakes, but the vintage Raleigh puts me in a more comfortable sitting position, and is faster and lighter than the Pashley. Yes, the 40-year-old clunker is faster and lighter - isn't that just bizarre? I can easily ride it for 30+ miles without being out of breath, whereas on the Pashley I often feel tired after much shorter trips. I am not certain which aspect of their anatomical differences accounts for this. It cannot be due to the 28" wheels alone: Batavus and Gazelle have 28" wheels and I find them to be slower and less comfortable than my Pashley. 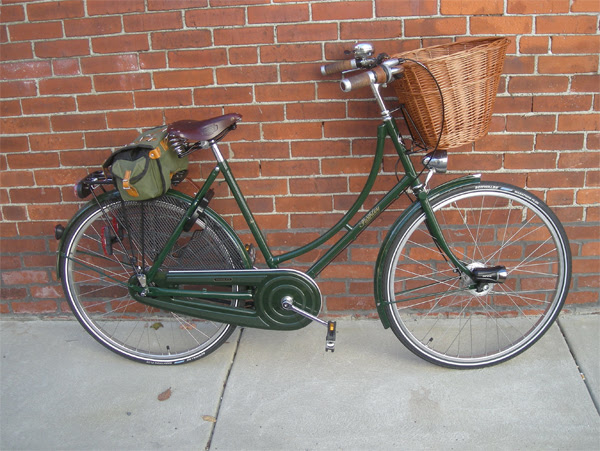 In an attempt to make my Pashley more anatomically similar to the Raleigh DL1, I have made some changes: The saddle has been raised and pushed back on the rails as far as it would go, and the handlebars have been tilted downward. I did not take a "before" shot, but on this photo from a few months ago you can see the difference. 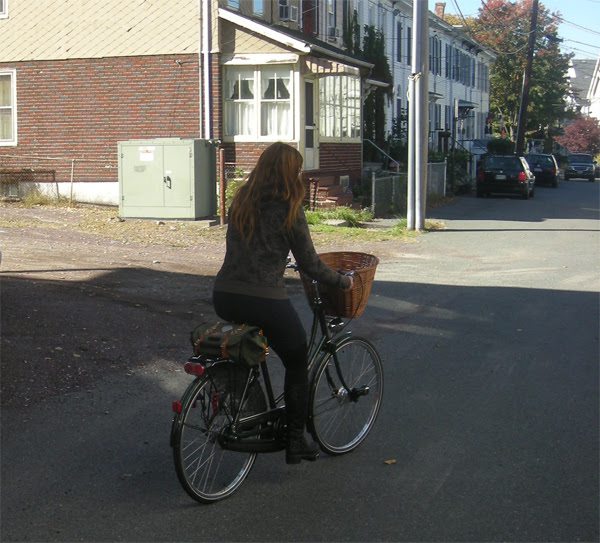 The Pashley does feel more comfortable this way, and my leg is almost entirely extended on the pedal now while still enabling me to touch the ground with the tip of my toe if need be. However, the Pashley is still as difficult to accelerate as it was prior to the changes. Hmm. If I had a magic framebuilding wand, I would build a bicycle that would replicate exactly - and I mean exactly! - the frame geometry of the Raleigh DL-1, while adding modern brakes and gearing. As far as I am concerned, the perfect bicycle already exists; someone just needs to start making it again.
Labels: DL-1 Eustacia Vye loop frame Pashley Raleigh Velouria