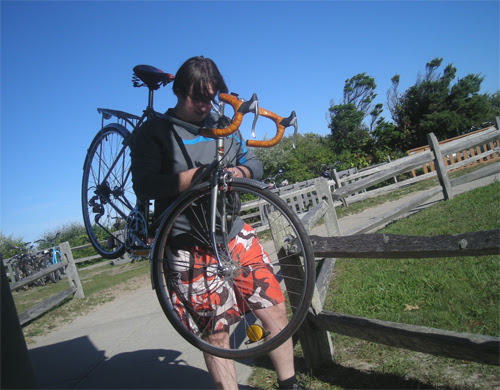 Yesterday was one of the warmest days of September, and we decided to give swimming a try. I've mentioned that there have been shark sightings on the Cape over Labor Day Weekend. That was more than two weeks ago, but still we chose a beach that was not one of the beaches where the shark sightings were reported. We went to the large and popular Marconi Beach, a beautiful ride from the place we are staying. Well, it looks like we have sightings of our own to report. 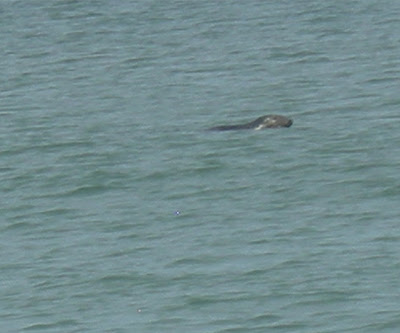 Here is a lovely seal, whom we saw once again very close to the shore (different beach than last time). This time I captured him on camera. There were surfers and swimmers in the water very close to the seal, reaching out to him and cooing.

And shortly thereafter, we saw this: 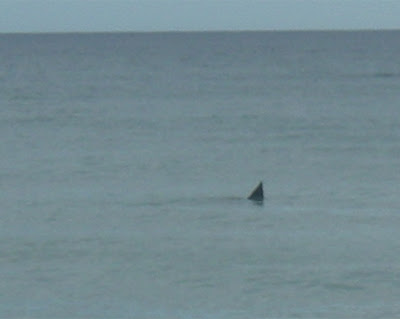 Definitely not a seal.

Yes, it's what you think it is. I have many photos, albeit from a 30-ft distance. The beachgoers began shouting "Fin! It's a fin!" ...and hurrying to grab their cameras. It circled around for a while, while the local children continued to wade in the shallow water. We didn't much feel like swimming after that, but this is the first time I saw a shark this close, so it was a pretty exciting trip to the beach nonetheless.

So... If you are planning a late-season visit to Cape Cod this fall, it is probably not a good idea to swim at any of the beaches along the National Seashore. Just a heads up...
Labels: Cape Cod Co-Habitant Motobecane Myles travel