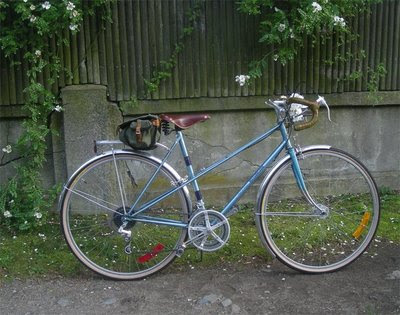 Marianne is a 1981 Motobecane Mirage Mixte in a shimmery aquamarine colour. She is a 21" frame, 12-speed, with original Weinmann and Suntour components. Motobecane was one of the better-known manufacturers of French road bikes in the 1970s-early 80's. The Mirage was a mid-range model. We bought the bicycle from the original owner, who had not ridden it much and kept it in good condition. Photos of the bike in its original state can be seen here.

Even though this is a vintage bicycle, I am reviewing it, because it is a readily available product in many areas of the US. Search your local Craigslist and similar sources! 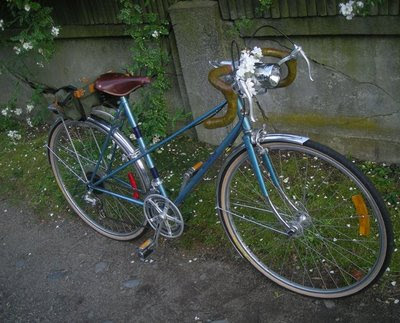 Tires: 27 x 1 1/4" Panaracer Pasela Tourguards. I chose these because they combine puncture resistance with the nice vintage look of amber walls. Some people dislike vintage French road bikes because of the non-standard 27" tires they use. But I love the size, as it seems to suit my proportions just right. Also, apparently 27" tires are now undergoing a "renaissance" and are easier to get than they used to be. 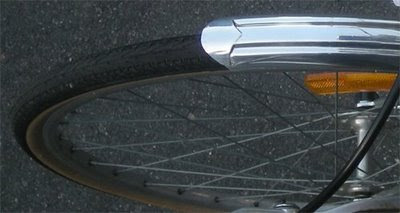 Fenders: Fluted Honjo fenders. These fenders are extra-extra long, which is useful for wet conditions, but also makes scrapes more likely. And I fell in love with the stunning art deco details. 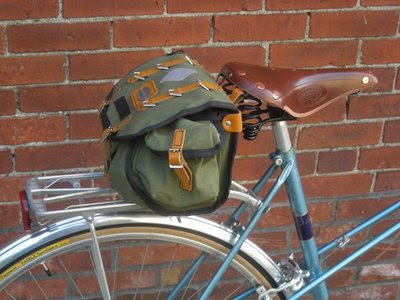 Saddle: Brooks Flyer Special in brown. The Flyer is exactly the same saddle as the B17, only with springs. The Flyer is designed for riding with the saddle at about the same height as the handlebars. The springs are very stiff, so they do not bounce you and do not impede speed. But they do act as shock absorbers when the road is less than perfect, which is very useful. The "Special" differs from the regular Flyer in that it has copper rivets instead of chrome.

Saddlebag: Carradice Barley. I am so in love with this bag! It does not take up much space, but is surprisingly roomy inside, and remains amazingly stable while cycling. Mine is secured both to the saddle loops and to the rear rack, because I like for my bags to lie horizontally. The side pockets are super-convenient for grabbing small objects (like mobile-phone and camera) while remaining on the saddle. 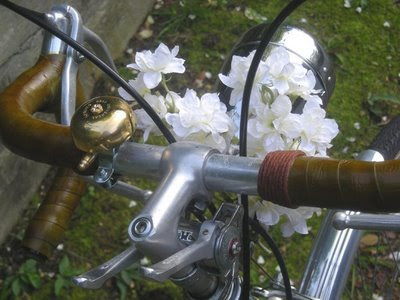 Handlebars: I decided to keep the original drop-bars and see whether I could handle them. As described here, my idea was to make them a sort of neutral/olive green. Initially we used cotton tape for this. It looked great, but my hands hurt like hell, because the bars were too stiff and too thin. I had to ride wearing padded gloves, and even that did not entirely take the edge off. So eventually, we wrapped the bars with Cinelli cork tape in "celeste", which turned into an organic-looking olive green after 2 coats of amber shellac. The tape is secured with shellacked cooking twine. The cork tape provided enough padding to stop the pain, and made the diameter just right for my long fingers to wrap around. The drop bars now feel fabulous.

Bell: Japanese brass bell with a "watch-winder" style ringer in the smallest size. 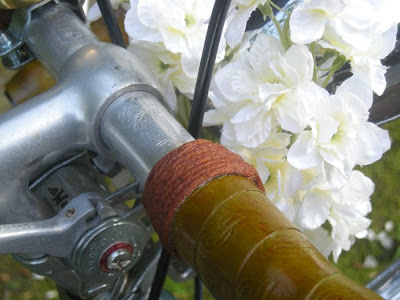 Flowers: Faux cherry blossoms from a local craft store. Maybe they are a bit over the top, but I could not resist! 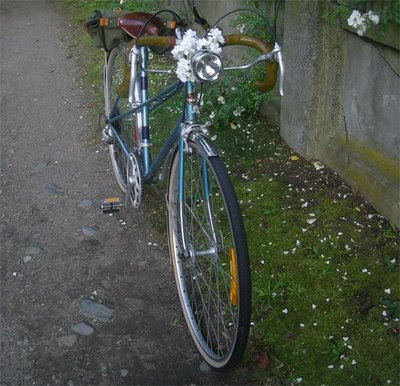 Lights: The headlight is a very retro-looking Low Rider Bullet Headlight by SunLite. A vintage-style headlight was very important to me, and Harris Cyclery was nice enough to do some reaseach and find this great product for me. In the rear we attached a CatEye TL-LD1100 onto the back of the rack. Both of these are battery operated. 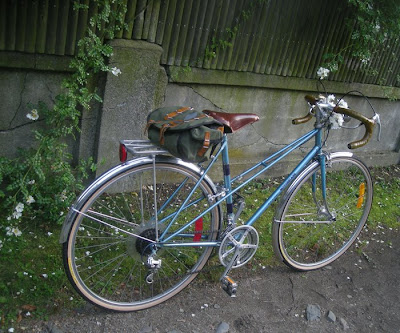 This was my first time riding a bike with drop bars and narrow tires. And okay, I will just come out and admit it: When I first got on this bicycle, I was unable to ride it down the street. I tried to take my feet off the ground and start pedaling (after all, a bike is a bike -- how different can it be?) and almost fell off. It felt like I was trying to balance upon a razor's edge. Frustrated and close to tears, I consoled myself that at least we hadn't spent any money on restoring the bike at that point, because clearly I had made a mistake in imagining myself capable of riding it. 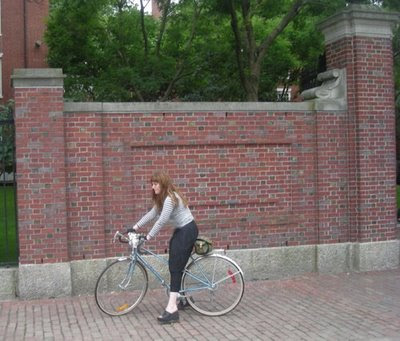 But just as I was about to dismount and call it a night, frustration gave way to determination, and I kept stubbornly practicing until finally -- it seemed magically -- I was able to ride it. It was scary, and I felt incredibly unstable, but little by little the Co-Habitant coaxed me further down our street, then across the street, and before I knew it, I had followed him on a 10-minute ride to a local coffee shop without incident. 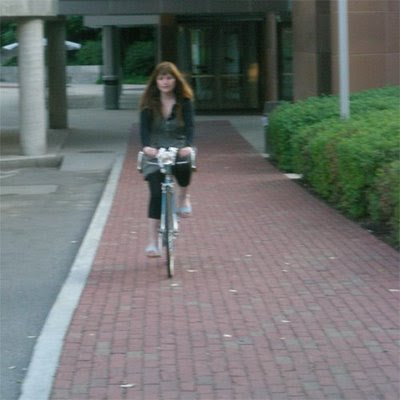 Whew. Seriously, Ladies -- if I can do it, anybody can! And just two days later, Marianne and I went on a long ride along the Charles River trail.

Of course I had known that road bikes are very different from mountain bikes, transport bikes, and hybrids. But knowing is one thing; doing is another! Here are the pros and cons of my experience with Marianne so far:

. Speed: She is a gazillion times faster than any bike I have ridden before.

. Hills: What hills? Up hill, down hill, it is all the same to her. I feel nothing as I climb the same hills that leave me panting and covered in sweat on an upright bike in 1st gear.

. Weight: At "only" 30lb including saddlebag, she is a joy to carry up and down the stairs compared to my Pashley.

. Stability: The narrow tires, low handlebars and light weight make Marianne radically less stable than any other bike I have ridden. Once I get going and pick up speed I am fine, but starting and stopping, as well as riding slowly through tight and narrow spaces with lots of turns, can feel like a circus act. I also have a hard time handling pot-holes and objects on the road.

. Sensitivity: Most racers would consider it a good thing that this bicycle is super sensitive, but for a beginner the sensitivity makes the bicycle difficult to control.

. Cycling in Traffic: I am not confident on this bicycle in traffic at all. The drop bars place my body in a position where I find it difficult to look back over my shoulder, and I also have trouble taking my hands off the handlebars to signal.

While some people report physical discomfort from riding road bikes with drop bars, I do not find the position uncomfortable. It is certainly different from the relaxed upright position of my Pashley, but I have not had problems with pain in my back, neck, or arms. It took some time to get the saddle and handlebar positions just right, and I encourage you to experiment with this as well if you experience pain. Try changing the height of the saddle and handlebars, as well as moving the saddle backward or forward. The right saddle and handlebar tape will also play a major role in your comfort level, acting as shock absorbers for your hands and butt. 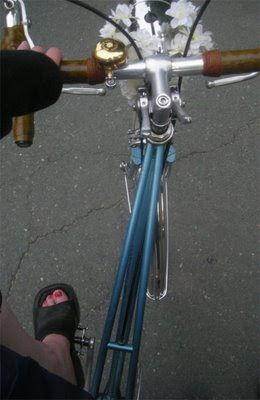 Giving new life to a vintage bicycle is an immensely rewarding experience. You can make the bike as personalised and unique as you wish, while maintaining a connexion to history. Vintage French road bikes are a world onto themselves -- a world of beauty, performance and quality. Mixte frames in particular have a romance and charm that is hard to resist, as well as a wonderful versatility: If you can't ride with drop bars, north roads and albatros bars are just as glamorous.

Since this review, Marianne has undergone many changes. See here for updated reviews: