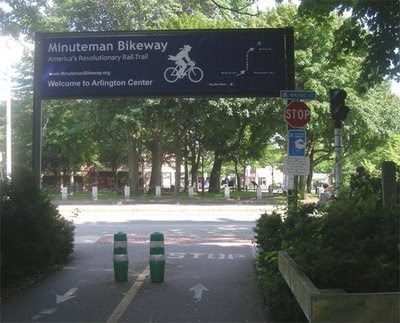 The Co-Habitant and I finally took Marianne and Miles to the Minuteman Bikeway. The Minuteman Bikeway is an 11 mile paved bike trail that runs from the edge of Cambridge, Mass., through Arlington and Lexington, ending in Bedford. 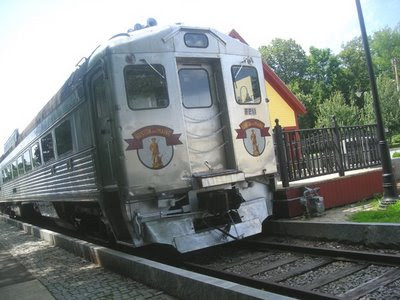 The trail was built along the old Boston-Maine railroad line, which you can see a glimpse of in Bedford. This train car has been converted into a cafe serving hot dogs and ice cream to hungry cyclists. 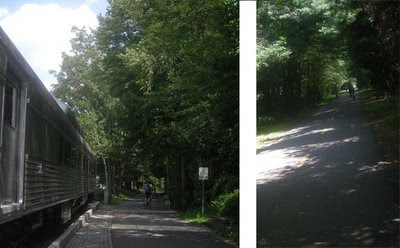 What I loved most about the Minuteman Bikeway is the abundance of shade! I am one of those persons who burns horribly and gets instant heatstroke at the mere whisper of direct sunlight in temperatures over 75F. A bike trail that runs almost entirely under overarching trees is a rare blessing. I can come here at any time of day and do a 22-mile loop without falling into a heat-induced delirium! 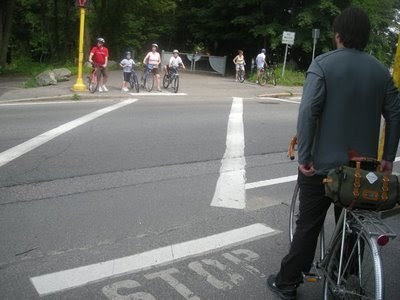 What I did not love so much, is that the trail interrupts for road intersections. The cars were courteous, but still I dream of an endless bike trail without interruptions -- Is there an American version of the Danube Cycling Path?

I was warned that going on the Minuteman on weekends was not a good idea, as it gets congested with slow-moving families and joggers. But we went mid-day on a Saturday, and didn't find it too bad. Certainly less crowded than the Charles River Trail. 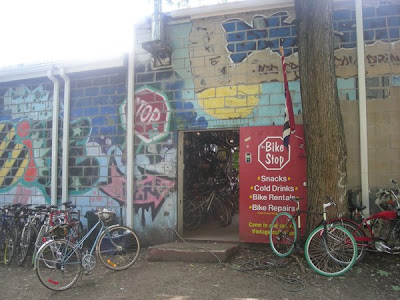 Conveniently, there are several cafes and grocery shops, and two bike shops along the trail. Pictured above is the Bike Stop, selling lots of nice used bikes in addition to new ones, as well as cold drinks and snacks. 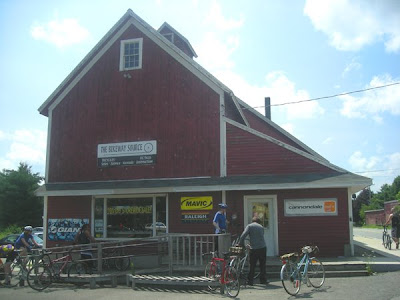 And at the end of the trail is the Bikeway Source, selling new bicycles, athletic bike clothing and many accessories, including some neat grocery panniers made of bamboo. We were told by the employees that after the Bikeway ends in Bedford, there is an unpaved dirt trail that continues all the way to Concord. It is accessible by mountain bike, but only during dry weather conditions, turning swamplike when it rains. 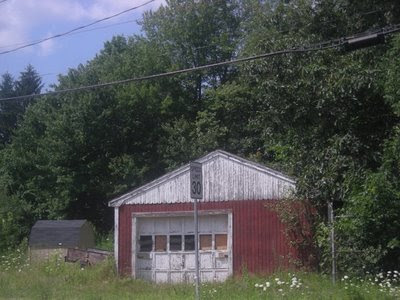 The Minuteman Bikeway is a scenic 22-mile round trip trail that is useful for pros and accessible to beginners. Riding Marianne was great fun and the longish ride made me a lot more comfortable with handling her. The most difficult part was cycling to the start of the trail from our house, in busy traffic through Somerville. Those who live around Boston know that this area is not ideal if you are not 100% steady on your bike! As I've mentioned earlier, I am not comfortable riding a road bike in traffic yet, so this was a challenge. The Co-Habitant gallantly made it easier by riding and signaling in a way that made us both visible. I probably could not do it alone at this point. One step at a time!
Labels: Boston countryside drop bars Marianne Motobecane Myles sun and heat trails