Can We See Beyond the Basket? 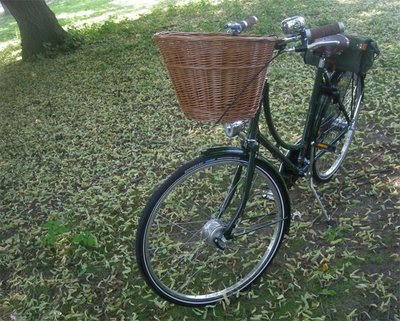 I have been taking out my Pashley Princess every day since I picked her up a week ago. She gets lots of comments and compliments. The comments come from passers-by, from other cyclists, and even from people in cars (waiting to turn left at an intersection, I heard a man say to a woman in the car behind me, "Don't you want a cute bike like that with a basket?").

And this brings me to my point: Interestingly, 95% of the comments I get have something to do with the basket. "Beautiful basket," "look at that basket," "Oh, and she's got a basket!" Even when people stop and ask about the bike itself, their body language betrays an irresistible attraction to the basket -- they start stroking it lovingly, examining the wicker and the leather straps in great detail, with the actual bicycle clearly occupying only the periphery of their attention. Witnessing this, my husband joked that bicycle sales and usage would increase astronomically if shops made a point of attaching a basket to every commuter bike. It is as if the wicker bicycle basket -- much like kittens and babies -- is genetically pre-determined to evoke a cooing response from otherwise level-headed adults.

To what extent then are we able to see beyond the basket to the actual bicycle? The basket on the Pashley Princess is so enormous, that it does seem to both define and dominate the bicycle itself. And while I love baskets, I am not sure I want that. The beautiful lines of the Princess frame and its countless other charms deserve to be seen. I have now ordered a different basket, which I think will be less overbearing and more unique than the stock one. Will see how that goes. The allure of the basket is a force to be reckoned with!

PS: I know that I have not been very expressive about my impressions of the Princess since having gotten her. That is mostly because I am still not entirely done customising her and getting to know her. Soon she will be in her finished state and I will post a full photo shoot and review. She even has a name!