Okay: So say, hypothetically, you acquire a Mixte. It is a beautiful pale marine-blue. And it comes with drop handlebars. And after reading an article by Sheldon Brown, you decide to give the drop bars a try rather than immediately replace them. Now, keeping this entirely hypothetical scenario in mind, what kind of tape would you get for said dropbars, if the awful rubbery stuff they are covered with will not do? 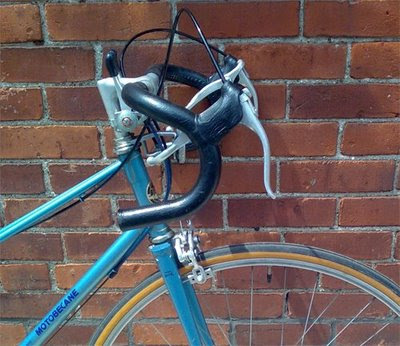 It is surprisingly tricky to complement pale marine-blue. I think that black deadens the colour, but brown tape can have a look of medical bandages to it that I don't like.

Inspired by the above picture from Rivendell, I thought that olive tape would look perfect. It is a neutral colour that seems to tie together the blue frame with the brown saddle and accessories. And it has a classic touring look to it, evoking images of the countryside.

Olive handlebar tape is pretty much impossible to find. But colour-theory tells us, that applying amber shellac to standard green tape would be akin to mixing brown into green, producing an olive drab colour. Let's hope it works out that way! 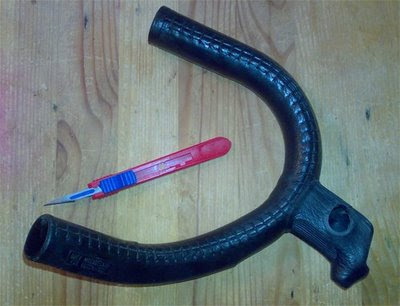 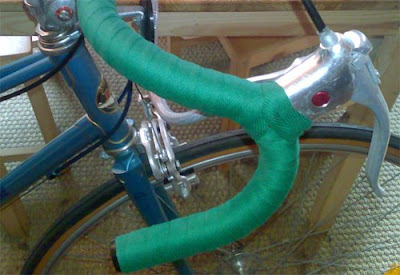 Handlebar wrapped in green Tressostar Cloth Tape. This is a standard green, looks very Christmasy. Definitely not the colour we hoped to end up with, but we have faith in colour theory. I should mention, that of course it was the Co-Habitant who did all the work, since I am still in Europe. He tells me that wrapping handlebar tape is not the easiest thing to do. So this project is definitely one step up from cork grip installation. 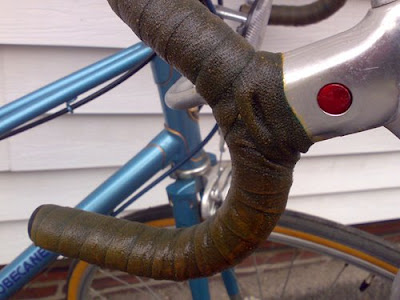 And now, voila: The green tape covered with amber shellac. This is what it looks like before the shellac sinks into the cloth and dries. I posted the above pic on bikeforums in response to someone's question about shellacking green tape, and the nice people there promptly told me that my tape looks like sh!1 : ) 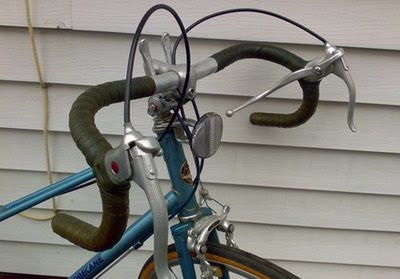 Here is the colour after it soaks in a bit. It becomes a true olive drab, exactly what I wanted. Hurray for colour theory! (Oh and that enormous reflector will soon be gone.)

Of course, this is all entirely hypothetical. Mixte? What Mixte!
Labels: DIY grips mixte Motobecane vintage