Can We "Ride Away" from Marketing? 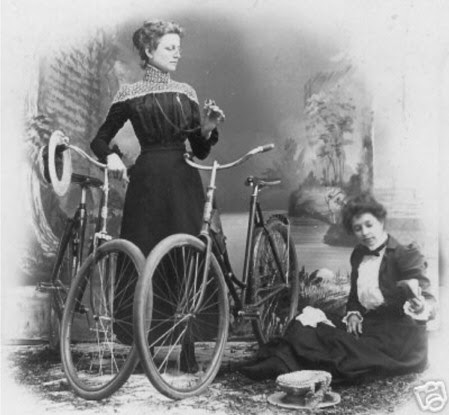 [image from goldenoldy.com]
An article appeared today on Copenhagen Cycle Chic discussing the ironies of advertising "cycle chic" gear and merchandise, when the whole point of the movement is, in fact, not to do or purchase anything special for cycling. "Looking for cycling clothes, Girlfriends? Open your f---ing closets!" suggests the author; "If anybody tries to sell you cycling clothes... run... or ride away!"

Personally, I agree. However, I am not surprised at the development against which Copenhagen Cycle Chic laments. The way I see it, the explanation lies in American culture and its perception of cycling. The US-EU cultural differences in this respect should not be underestimated. Let's explore the central assertions made by Copenhagen Cycle Chic:

1. Cycling in regular clothing is not a new concept

One point that the article stresses, is that the idea of riding in regular clothing isn't new, citing that it has been done in Europe all along and even in the US at the turn of the 20th century. I have heard this remark before from my European friends, and I think it is mis-applied here. Keep in mind that most Americans never have a chance to visit Europe (especially beyond the context of being a tourist), and also most of them certainly were not alive at the turn of the 20th century. So for the collective memory of mainstream American culture, the idea of "chic" cycling is fundamentally very new, very shocking, and difficult to fully process. Until two years ago, most Americans did not know that bicycles with dress-guards and chain covers still exist.

I would say that riding a bicycle elegantly has been more difficult in the US than in Europe, for several reasons:

Availability of comfortable bikes: Until very recently, American bike shops only sold very sporty types of bikes: basically, road and mountain bikes, with the hunched-over seating position, male horizontal bar, no fenders, no chain covers, no lights, etc. I invite you to try riding such bicycles in your office clothing or pastel summer dress!... Even today, purchasing chain covers and dress-guards in the US is not a simple matter. Two years ago it was nearly impossible.

Geography: Most American cities have more hills than Amsterdam and Copenhagen. Also, typical commuting distances are much longer. In the US it is entirely normal to work 30+ miles away from where you live. Try arriving to work fresh and dignified in your office clothes after a 30 mile ride up and down hills! On the blogs out there, I have read comments from several American bike shop owners, stating that customers who buy heavy Dutch bikes are often not satisfied with them -- they find using them in their local terrain too physically challenging.

Infrastructure: Cycling on American roads is more intimidating and dangerous than on European roads. This causes people to feel that it is necessary to outfit themselves with athletic gear and helmets, in order to feel up to the challenge and be less vulnerable.

3. The advertising industry is using the "cycle chic" movement to sell us unnecessary stuff

I am not so sure that I would blame it on the predatory advertisers. Keep in mind that the United States has a more consumerist culture than Europe. When people have a new hobby or interest, part of the fun is buying lots of special stuff for it, and manufacturers oblige by providing that stuff. The idea that you do not need any special accessories for chic cycling is sad and boring American consumers. They don't want to open their closets, they want a reason to go shopping. Pushing the anti-consumerism aspect of cycling might actually reduce the rising public enthusiasm for the activity.

It might seem that I paint an unflattering picture, but really I am just being realistic. Cycling in North America has its own unique set of historical, cultural and geographical influences that must be recognised. The recent articles and advertising campaigns that may seem ridiculous to the European mind, make sense when the American point of view is considered.
Labels: bicycle industry bike shopping clothing fashion industry social commentary