In Defense of the "Frivolous" Bike Craze 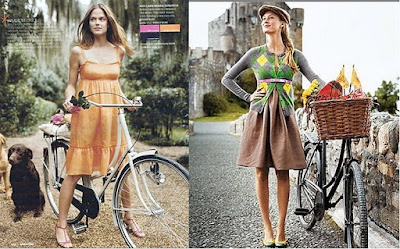 [J. Crew catalog excerpt; image from pink-to-green.blogspot.com]
During the past two years, traditionally styled bicycles have gained considerable popularity in the US. Fashion models in ad campaigns have been featured riding Gazelle and Jorg & Olif, celebrities have been photographed cruising around on their Electras, and there is over a dozen weblogs now across North America dedicated to cycling and fashion. The New York Times made it official by referring to the stylish bicycle as the current must-have fashion accessory.

It is hard not to notice that some of the discussions of the “Dutch bicycle craze” come with a degree of scorn. There is an assumption that those who are buying such bicycles are not actually interested in bicycles, but merely want the latest “It” item -- a frivolous, consumerist attitude that is embarrassing to the real, authentic bike lovers. I have gotten this response form several shop owners when I told them what kind of bicycle I was looking for, as well as from some acquaintances who have been riding road bikes for years. Surprised and disappointed to encounter this sentiment, I offer two lines of argument in response.

[Gazelle Toer Populair for Club Monaco; image from thisislavie.com]
First off, those rolling their eyes at the girls who supposedly must have a Dutch bike as a fashion accessory, may be misunderstanding the situation. If you read the first post on this weblog, I think you will get a pretty good idea of why many women in the US do not ride bikes, and how introducing them to traditionally styled bicycles can change that. When I saw a Gazelle on the street for the first time, I did not know what it was. I had no idea whether it was new or vintage and whether it was considered popular in the public eye. What I did know, was that finally I was seeing a bicycle that I would be willing and able to ride.

The point is, that before the Dutch-style bicycles began to be imported in the US, it was simply not possible for fashion-conscious and unathletic women to ride a bike. There were no products for them to buy that would have accommodated their lifestyles. Now there are, so they are buying them. Therefore, to say that they are buying fashion accessories that happen to be bicycles is to misjudge the situation. They are buying these bikes, because finally the kind of bicycles that suit their tastes are available.

Second, even if some persons are interested in these bicycles only because they have been deemed a fashion must-have, I do not understand why this should evoke criticism. Is it not the ultimate victory for cycling advocates and environmentalists, that it is suddenly possible to get even the most unlikely suspects interested in commuting by bicycle? Wouldn’t it be an ideological coup for the go-green movement, if all those glamour girls previously driving enormous SUVs now think that cars are totally uncool and anyone who is anyone must have a Dutch bicycle? I can assure you that the majority of the population is far more likely to be influenced by these giggly spokespersons than by the earnest Green activists. It really seems like a win-win situation to me.

So please, hard-core cyclists: do think twice about criticizing those who you think want a bicycle “for the wrong reasons”. Consider instead what a fabulous thing it is, that they want a bicycle at all.
Labels: bicycle industry dress guards fashion industry gender skirt social commentary