Yearning for a Lovely Bicycle

Before all of this began, I had not been on a bicycle since my teenage years in the 1990s. Back then, my trusty beat up bike felt simply like an extension of my body -- I rode it everywhere, wearing anything I wanted. Riding did not require any special preparations. The bike was easy to operate and it gave me a sense of independence. 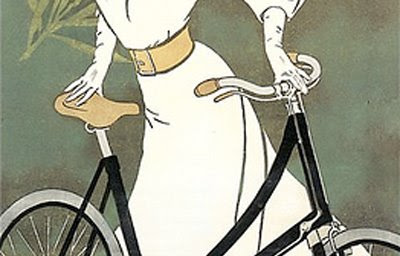 
Somehow in adulthood, things became different. It seemed impossible to simply buy an attractive, comfortable bicycle and ride it. There was a bike culture, where cycling was positioned as a formalised, athletic, and often political act. This culture has done a great deal to keep me away from bicycles.

My associations with bicycles from seeing them ridden in American cities included hunched-over postures,  blotchy, sweat-stained faces communicating a curious combination of misery and self-righteousness, commitment to a wardrobe of lycra or t-shirts with anti-car slogans, and constant risk of collisions with motor vehicles... none of which appealed to me. Combined with the bicycles themselves - aggressive, awkward monstrosities that I wouldn't begin to know how to physically negotiate - bike culture was not something I found compatible with my ideas of dignity and aesthetics. If it were possible to ride a bicycle with grace and without the need to sacrifice my personal tastes - perhaps I might want one again. But what I had seen on the streets and in bike shops was not encouraging.

[image from http://sellwoodcycle.com]
Only on vintage posters and in old art films did I see the bicycle portrayed in a manner that made me long to cycle again. The relaxed style exuded by the fictional ladies of yore was alluring and enticing; it made cycling seem feasible. But did such bicycles still exist in today's world?

On a sunny Spring day in Somerville, Massachusetts, I found my answer. Chained casually to a parking meter, it was the first bicycle I had seen on the city streets that I would describe as lovely. It had a beautifully shaped ladies' frame and gracefully curved handlebars. It was fitted with all sorts of fascinating components including a chain cover and a basket rack. It was decorated with flowers.

I jotted down the name: Gazelle, and did some research. And suddenly, an entire new world had opened up: a world of relaxed-style urban bicycles that are very much in production today using the same traditional design elements that I so admired on the vintage posters. These bicycles were most definitely lovely, and I immediately began my search for one to call my own.
Labels: bicycle industry Boston dress guards Gazelle loop frame social commentary