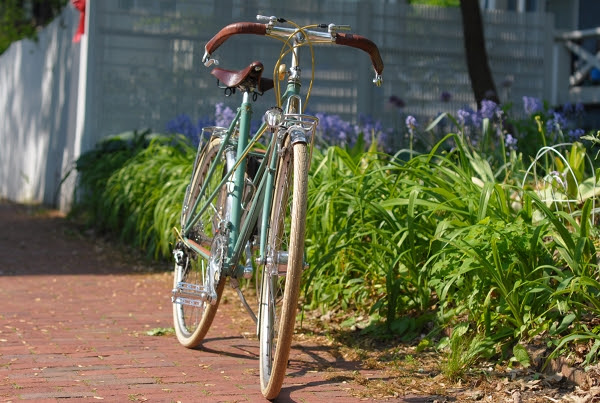 In pharmacological jargon, there is a term, "off label use," that refers to a treatment being used successfully for something other than it was originally formulated for. That's kind of how I am starting to feel about my Royal H. mixte. When I asked Bryan to build me this bike in the Fall of 2009, I envisioned it as predominantly for light touring. But in practice I mostly use it as a long-distance transportation bike. I think I've only done recreational rides on it a total of maybe three times, whereas I ride it for transportation whenever I need to travel over 7 miles or so one way - which is several times a week.

Using a bike for purposes other than intended can happen for any number of reasons. For instance, our cycling preferences can change, as mine did. For recreational riding, I now prefer to ride a diamond frame bike with drop bars. Also, life circumstances can change. Just a couple of months after I got the mixte, we ended up without a car, and I actually needed a light, easy long-distance transportation bike. When I was ordering the bike, I did not foresee either of these changes. 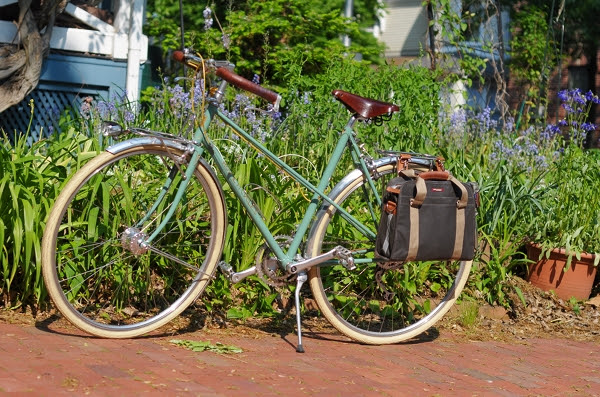 The good thing about using the mixte "off label," is that most of the things that made it good for light touring also make it work as a long distance transportation bike. The frame allows me to wear a skirt. It can handle hills and distances without me breaking a sweat. Its compact size and maneuverable handling make it good in the sort of suburban stripmall-roadish traffic that I usually encounter out of town. The springy ride quality means that long trips don't tire me out.  The 35mm tires are sufficiently wide for bad roads and even off-road. The dynamo lighting system is fantastic and I never have to worry about getting stuck in the middle of nowhere in the dark. The front and rear racks enable me to carry several small loads at a time. Everything that I need for my trips is there. The few times I've tried to use a roadbike for long distance transportation, I arrive to my destination out of breath and with sweaty hair. On the upright mixte I am a bit slower, but am always presentable and fresh.

There are however a few things that are less than ideal about the mixte given how I use it. The short chainstays made it difficult to find panniers that did not give me heelstrike, though I did find several after having made a mission of it (see Philosophy, Cristobal, and the Po-Campo pictured here). But the more irksome issue is that I get a wee bit of toe overlap on this bike, which freaks me out when cycling in traffic. It is a small amount of toe overlap that might even disappear if I wore PowerGrips or removed the fenders - but neither of those is practical on an upright transportation bicycle. Converting the bike to 650B would solve the problem, but would be expensive, considering that I'd have to get new wheels built, and buy a new set of brakes, as well as new tires and fenders. So I am kind of stuck between thinking that the toe overlap is not a big deal and the bike is fine as is, and being irritated with it, since it is the one thing that undermines my enjoyment of an otherwise fantastically versatile bicycle.

Lots of bikes are used off-label round these parts, and the prevalence of this practice made me smile last night when a carbon fiber racing bike flew by with a sizable steel front basket attached to the fork, sort of like this. My re-purposing of the mixte is not nearly as dramatic, but the question of a possible 650B conversion keeps swirling around my mind every time I ride the bike. Would you do it, or leave it be? Any interesting off-label use stories of your own to share?
Labels: fenders mixte Royal H Royal H. Mixte