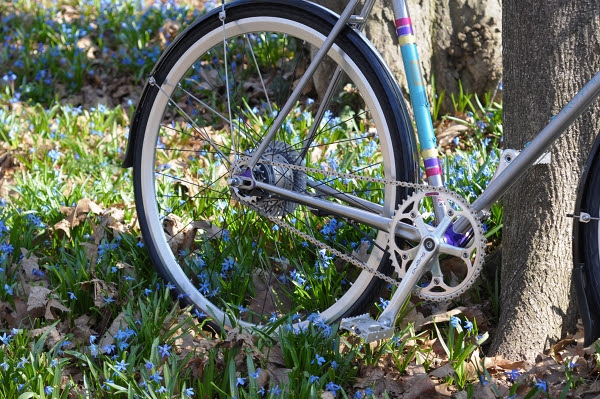 Here's something to brighten up your weekend: Rainbow bike! 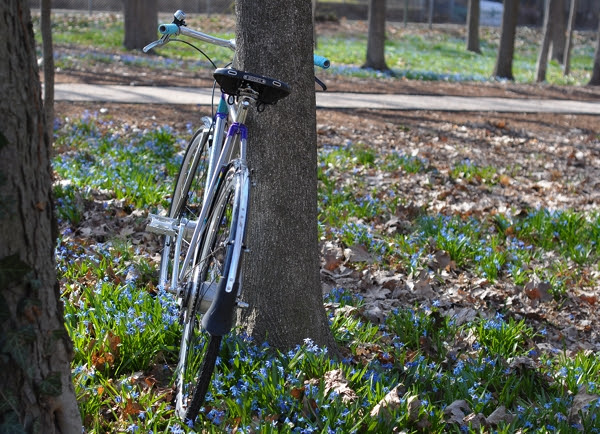 Back in November, reader Jim P. was trying to choose a colour scheme for the stainless steel Royal H. bicycle he had ordered and somehow I ended up helping. Jim mentioned turqouise and possibly violet. I suggested multi-coloured bands. The painter's interpretation was unexpected, but delightful: Rainbow Bike was born. 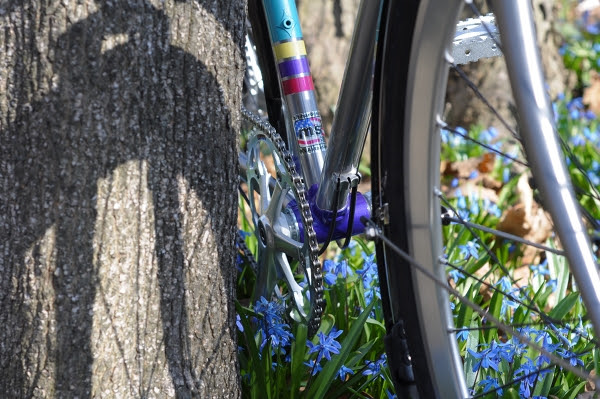 Just as the wildflowers of Somerville started to blossom, so did Rainbow Bike emerge, fully built up, out of the Royal H. workshop. 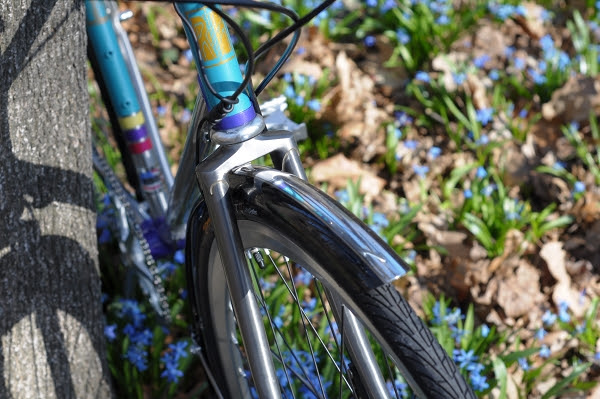 Bryan Hollingsworth makes diverse bicycles, and this one is a combination of classic and modern: A lugged steel frame with contemporary colourwork, an 8-speed hub, upright handlebars, dynamo lighting, drum brakes, and deep V wheels with 700Cx32mm tires. 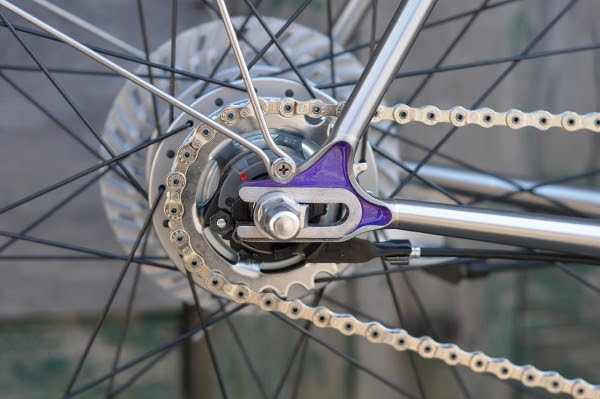 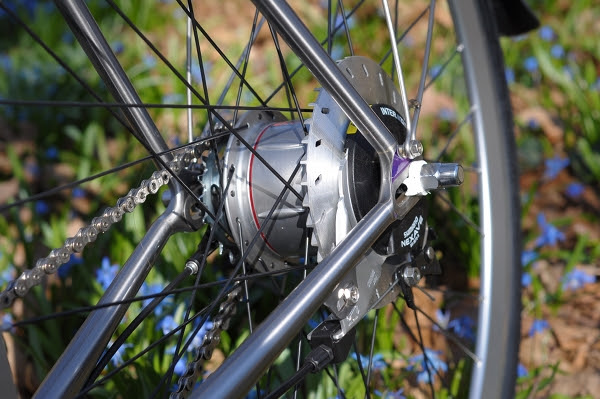 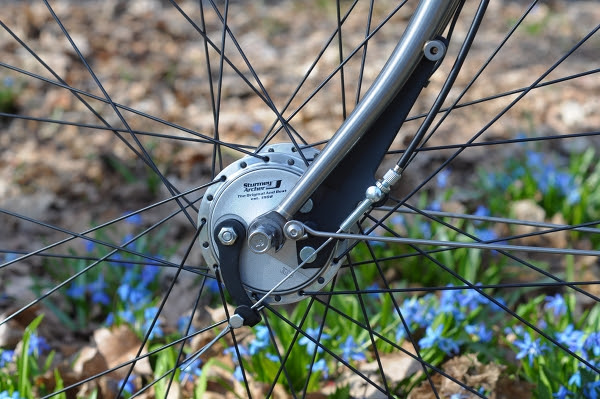 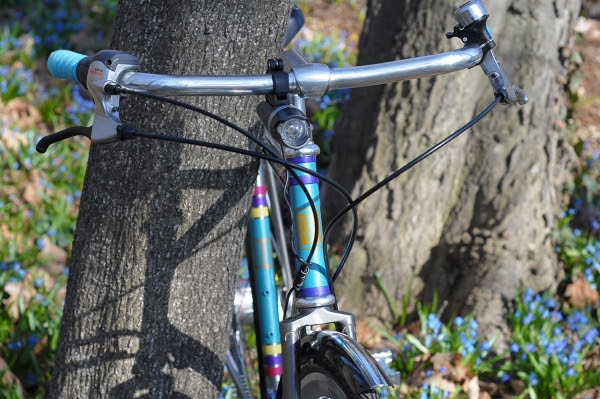 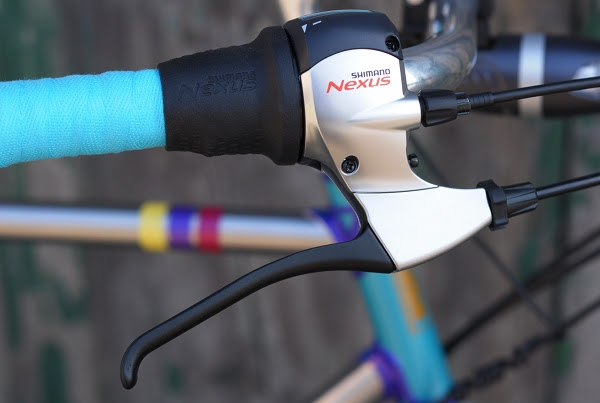 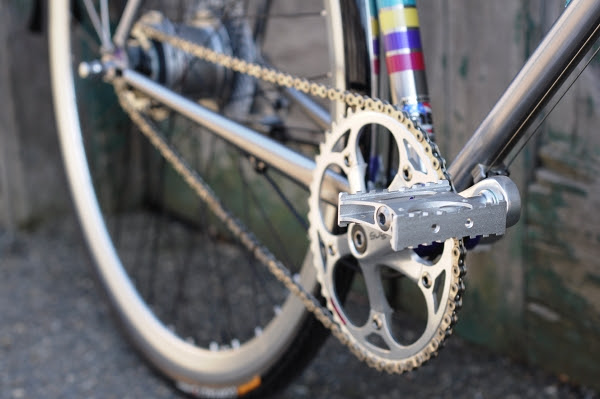 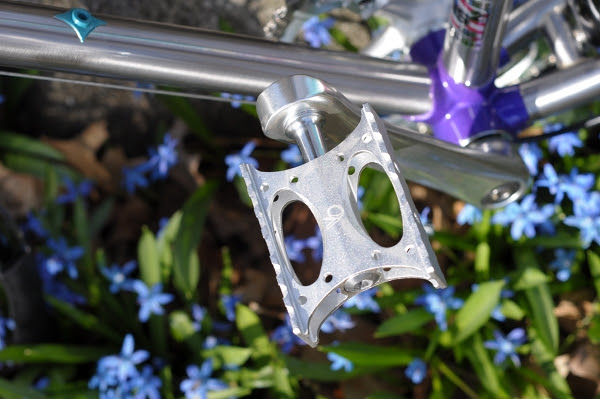 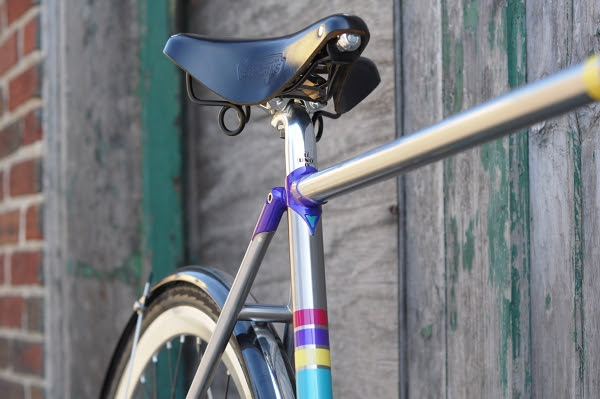 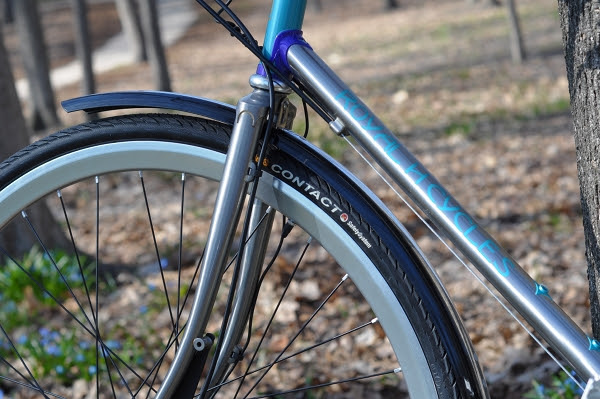 And zippy Continental tires with sleek modern fenders (I believe these are Planet Bike, but not sure). 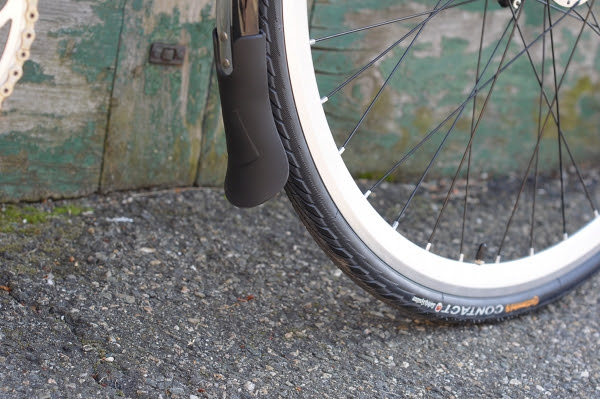 (Have mudflaps ever been used with deep V wheels before?..) 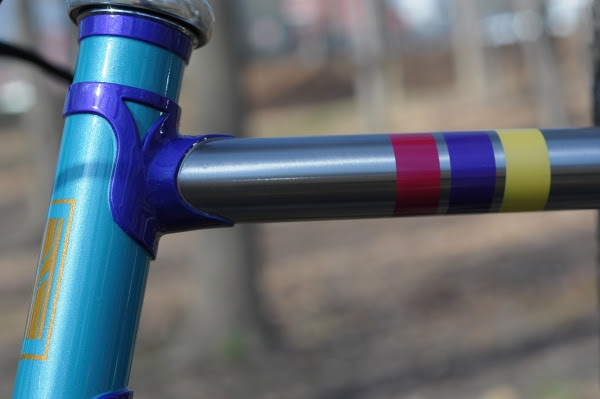 And lest I forget - the lugwork. 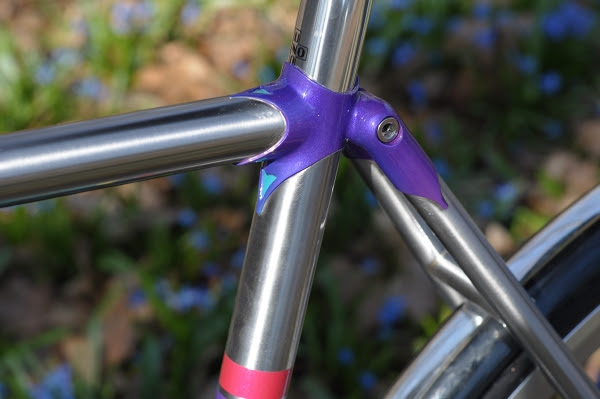 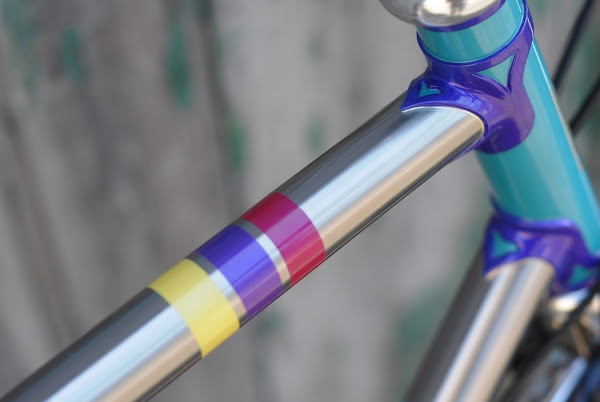 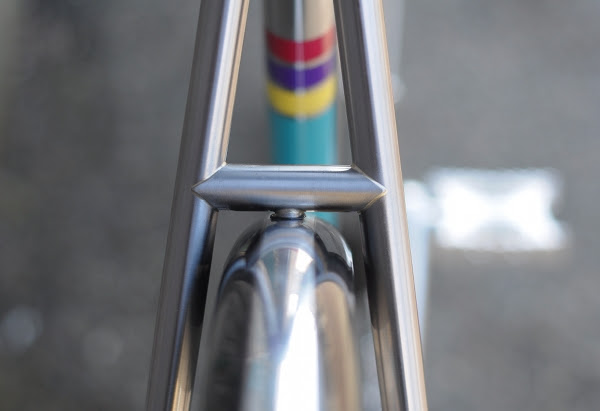 Looking at this bicycle is making me feel hyperactive! 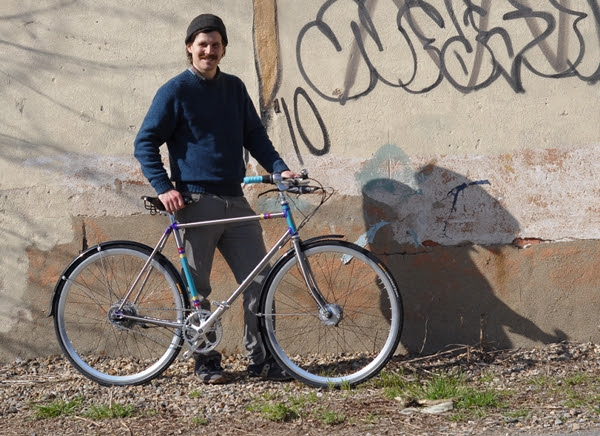 One nice thing about Bryan, is that he and I are roughly the same height, as are some of his clients... which means I can test ride the bikes! With permission, of course. 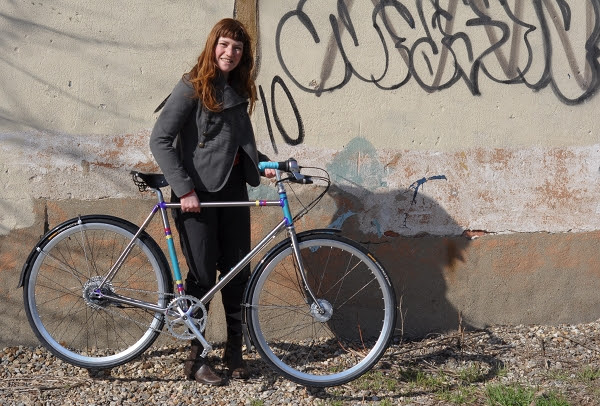 Ever-curious to try new bikes, I could not resist taking it on a test ride. 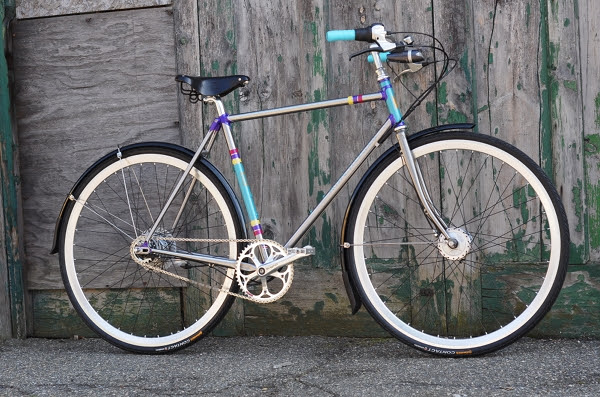 At first I was nervous, since I was riding somebody else's bicycle. But Rainbow Bike was so much fun, that I soon got over it and began to enjoy it. I rode through Somerville and Cambridge, stopping for photos along the way. 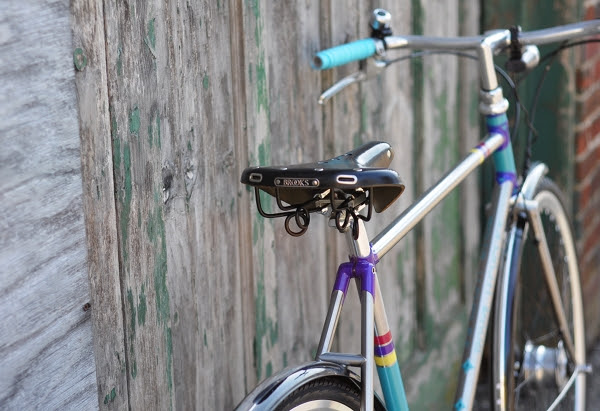 Designed to be light, zippy, but comfortable, that is exactly how Rainbow Bike handled. The ride quality felt similar to my mixte in its stability and responsiveness, but slightly less aggressive. It's possible that this might just be the result of my bike's handlebars being set lower, but it could also be something in the geometry, not sure. I also did not feel as much flex in the fork on this bike as I feel on my mixte, and Bryan confirmed that he made the fork on this one stiffer, because of the drum brake. 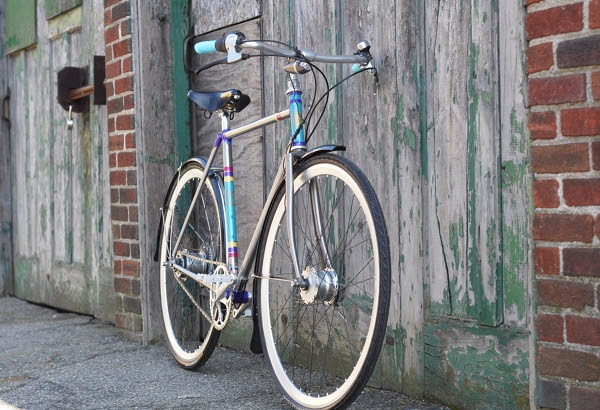 All in all, I was surpsised at how quickly I felt at home on this bicycle. If it were my bike, I would have set it up somewhat differently - choosing classic components and wider tires. But it's not my bike, and experiencing something that I would not myself order was part of the fun. I was almost disappointed that the deep V rim wheels did not feel any different to ride than standard wheels. Bryan says that he prefers them, because they are stronger. I think that they fit in well with the overall theme of this bicycle. The 8-speed Shimano hub was 5 speeds too many for me, but it performed absolutely fine and had a very comfortable 6th gear that I stayed in for most of the time. I loved the Velo Orange city pedals, which I'd never tried before. Everything functioned smoothly, and the bike seems ready for its new owner - though first it will be heading to the New Amsterdam Bike Show in New York City to prance and show off a bit. 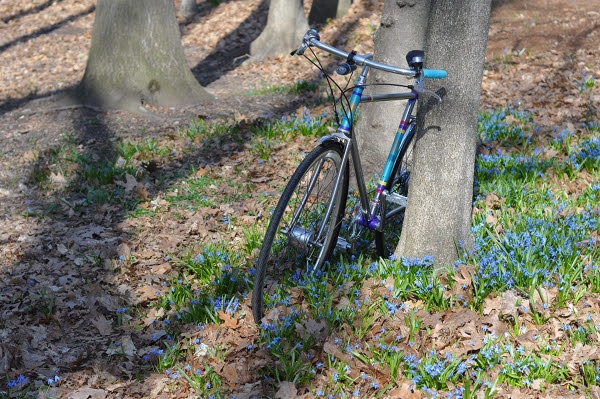 Thank you to Bryan and Jim for letting me test ride the bicycle. Rainbow Bike wishes you all a sunny and beautiful weekend!
Labels: bicycle reviews diamond frame fenders framebuilding Royal H